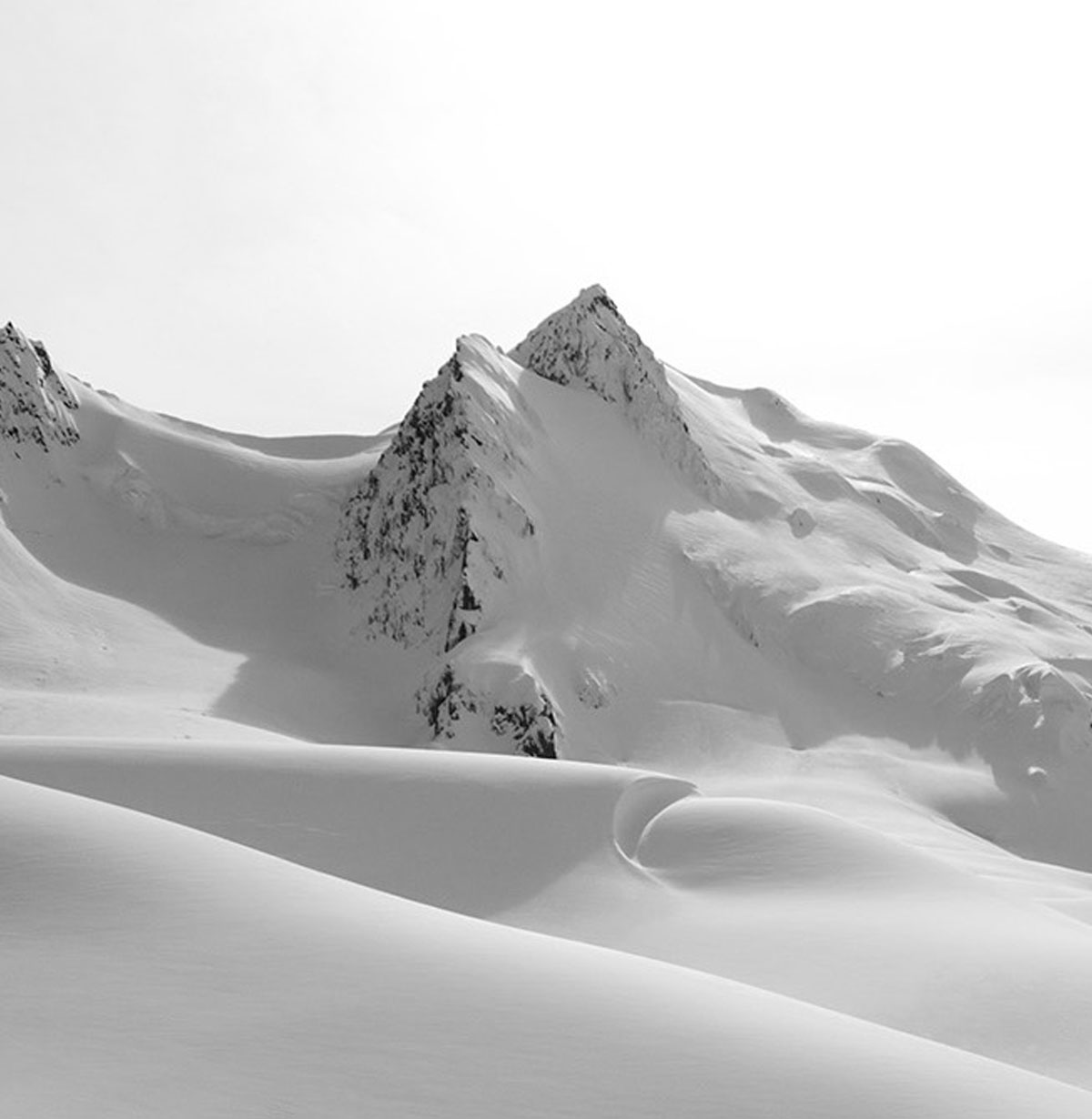 Thrilled to present a trip report from the 2018 Jones Backcountry Adventure Grant expedition. In April 2018, Mount Baker local Corey Nolan and a crew of friends used the grant to help fund an exploratory trip to Kenai Fjords National Park in Alaska. Check out the trip highlight video by Kevin Nolan and Corey’s full report + photos below. Use this as inspiration to start working on your application for the 2019 grant!

Although this trip took place in April 2018, the inspiration for it began upon arriving in Alaska the previous spring. In April 2017, my girlfriend Maya and I left our home state of Washington to pursue bigger adventures that summer. We took jobs guiding for a small, high-end sea kayak outfitter called Liquid Adventures in the town of Seward, AK. The company specializes in remote trips deep within Kenai Fjords National Park; where the jagged peaks of the Kenai Peninsula fall almost vertically into the gulf of Alaska.

It didn’t take long for us to begin dreaming about putting together an extended snowboarding trip somewhere in the park. Toward the end of the summer, while guiding a kayak trip in the park’s Northwestern Fjord, I glimpsed a zone that seemed to hold exactly what we were looking for: a large glaciated bowl with steep peaks on all sides. It offered some classic “Alaska" style terrain, and also had an approach from tideline that looked fairly viable. I snapped a few photos of the zone and continued on with the kayak tour, never actually getting closer than about 2 miles from the beach where I hoped we could basecamp.

After scouting and calculating the feasibility of the trip, I was excited to see that the guidelines for the Jones Backcountry Adventure Grant lined up perfectly with what I’d hoped to do. Winning the grant last February was a dream! I quickly put together a crew of seven friends to join me on the trip including my long time splitboard partner Max Paetz, my cousin Kevin who is a videographer, Maya as the trip photographer, and friends Ben, Ryan, Seth and Jilli. We would be going to a remote zone so I felt better going with a little bigger group. After a lot of googling and logistical planning, the trip came together for the middle of April. 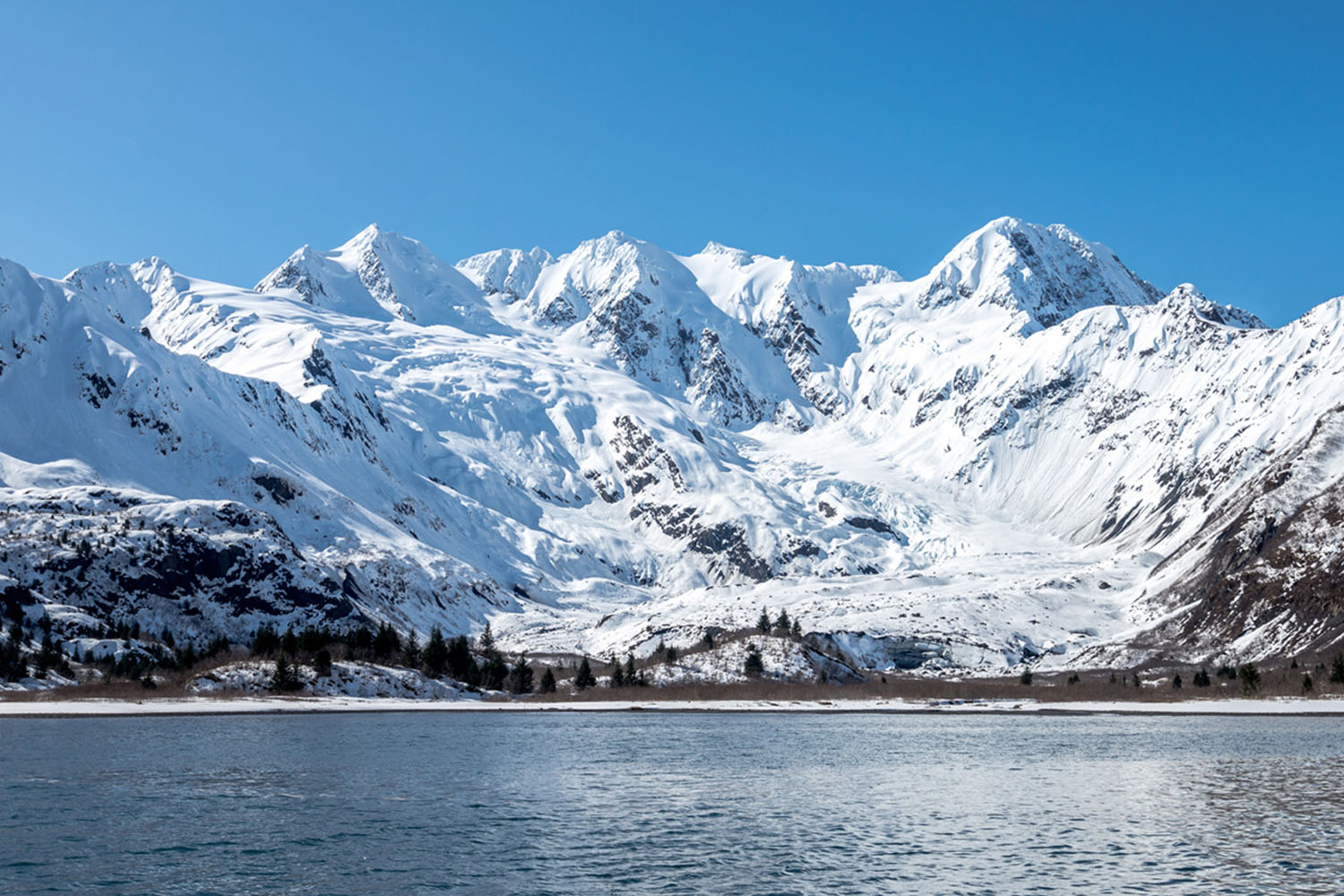 Arriving in the zone

When we arrived at the Northwestern Fjord, it was even more magnificent than we could’ve hoped for. The sun was shining and clear skies allowed us to see glaciers flowing thousands of feet down the granite peaks with their toes touching the salt water of the Pacific. One look and it was obvious you could spend a lifetime exploring this zone if the conditions were right.

From where the water taxi dropped us off, we packed kayaks full of gear and shuttled them to our basecamp. Our basecamp was placed precariously between the high tide line and deep snow banks. It was an epic camp spot but the only issue was that the area would likely become a large bog should the snow continue to melt quickly.

Soon after we finished dinner that first night we noticed a small figure moving swiftly towards us across the beach. It’s large, weasel-like body and easy stride assured us that it was a wolverine. No doubt he had caught scent of our smoked salmon pasta and seemed to be interested. We scrambled to clean up and find our only defense, a can of bear spray. Fortunately for us, the wolverine changed course and disappeared into the brush, never to be seen again.

The first night excitement was not yet finished, however. Soon after the wolverine disappeared, we were startled to watch a Volkswagen bus-sized boulder roll down the hill and explode onto the shoreline in the exact place we’d been dropped off earlier in the day by the water taxi. Laughing uneasily, we all hoped the wolverine and the boulder weren’t bad omens. 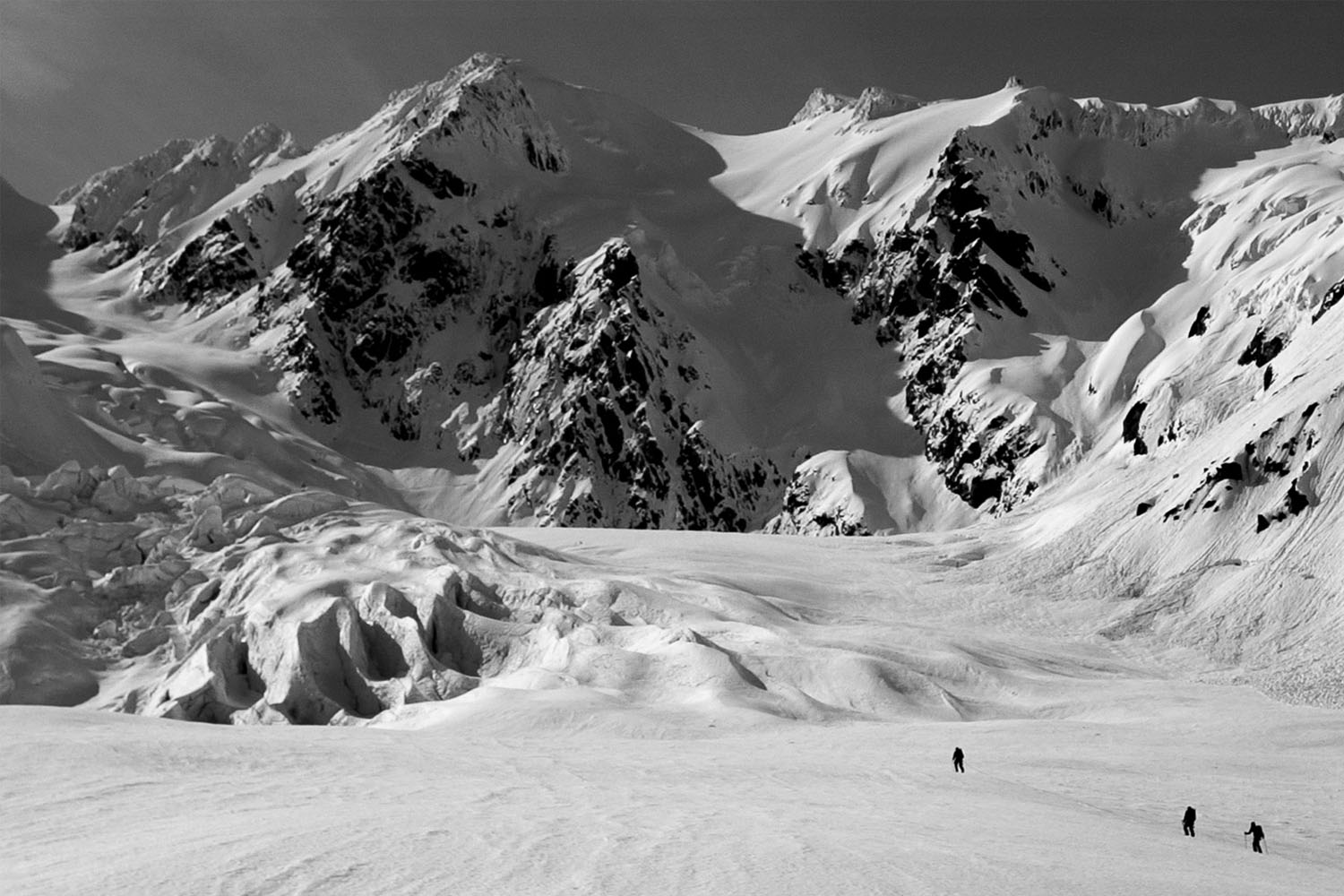 First tour onto the glacier

The next morning we were grateful to be greeted by the sun. We skinned from our basecamp, down a frozen stream bed and onto the toe of the glacier. We roped up and continued toward the more crevassed part of the glacier where the icefall meets the valley floor. Still unsure about overall snow stability and wary of the big holes in the convex zone, we determined we would need to make a large zig-zag to avoid overhead exposure of avalanches and to find a good line around the icefall. All three rope teams ascended through the upper glacier to a meeting point about 1,000 vertical feet from our objective. 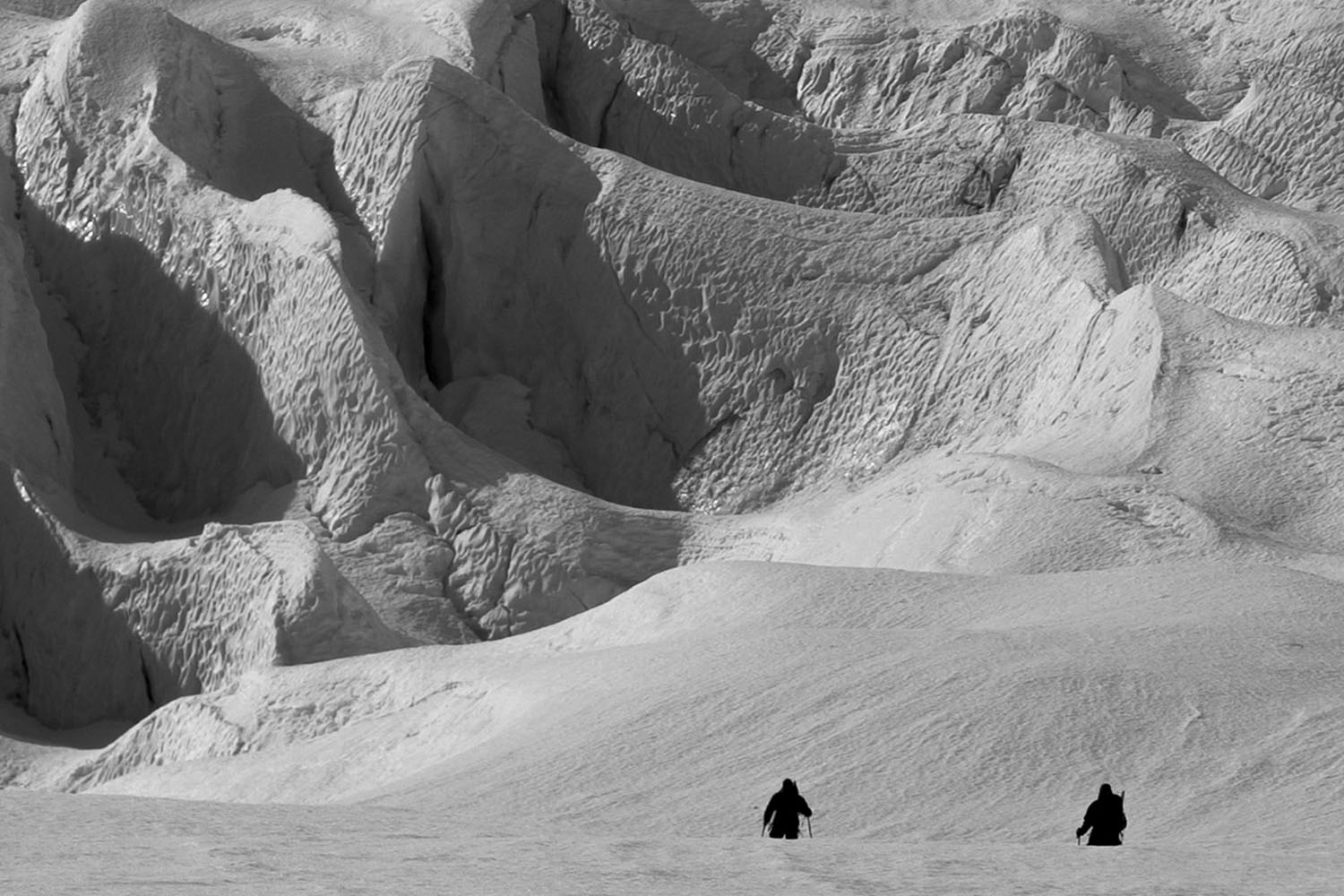 Two rope teams descended from the top of the upper glacier. Max, Maya, and I decided to continue higher. Worries about snow stability on the upper headwall made us hesitant to go for our main objective, so we decided to cross back over the top of the glacier and summit a smaller peak just south of our main objective. Soon the three of us stood atop “Micro Peak” and enjoyed the view. To the south the Pacific stretched out to the arc of the earth and to the north the Harding Ice Field was just barely visible behind the jagged, black mountains that appeared to be the gates between ice and sea. 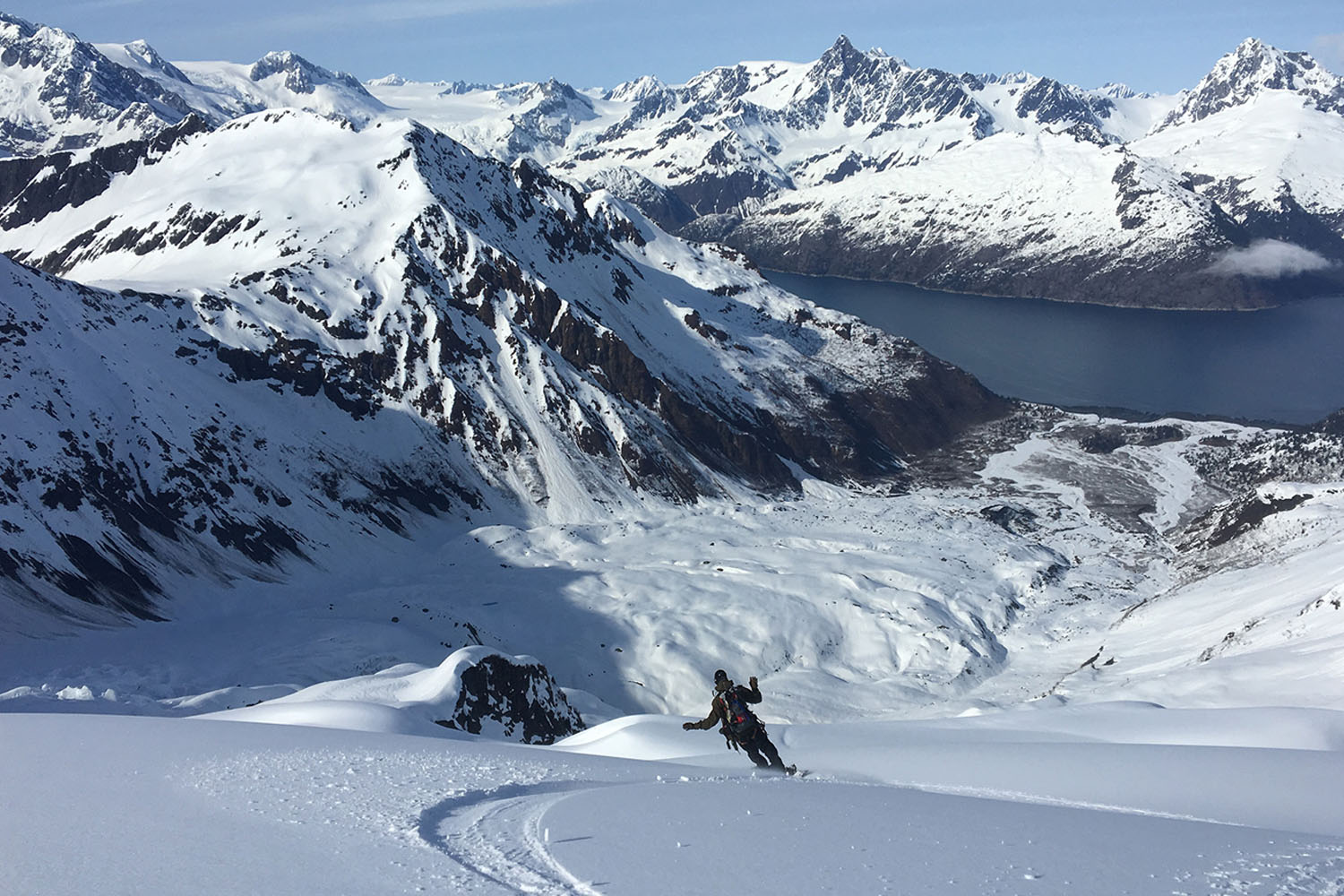 Dropping in, we found good snow conditions for the first thousand feet. We strung together large, smooth turns, weaving in and out of the contours formed by the large crevasses and jumbled ice that loomed below the snowpack. Exiting the glacier, we crossed an undulating hill side with variable conditions. We found rutted ice, deep slush, and a grainy bed surface where avalanches had recently happened. All of these snow types were red flags that the snowpack was in transition and could be dangerous. 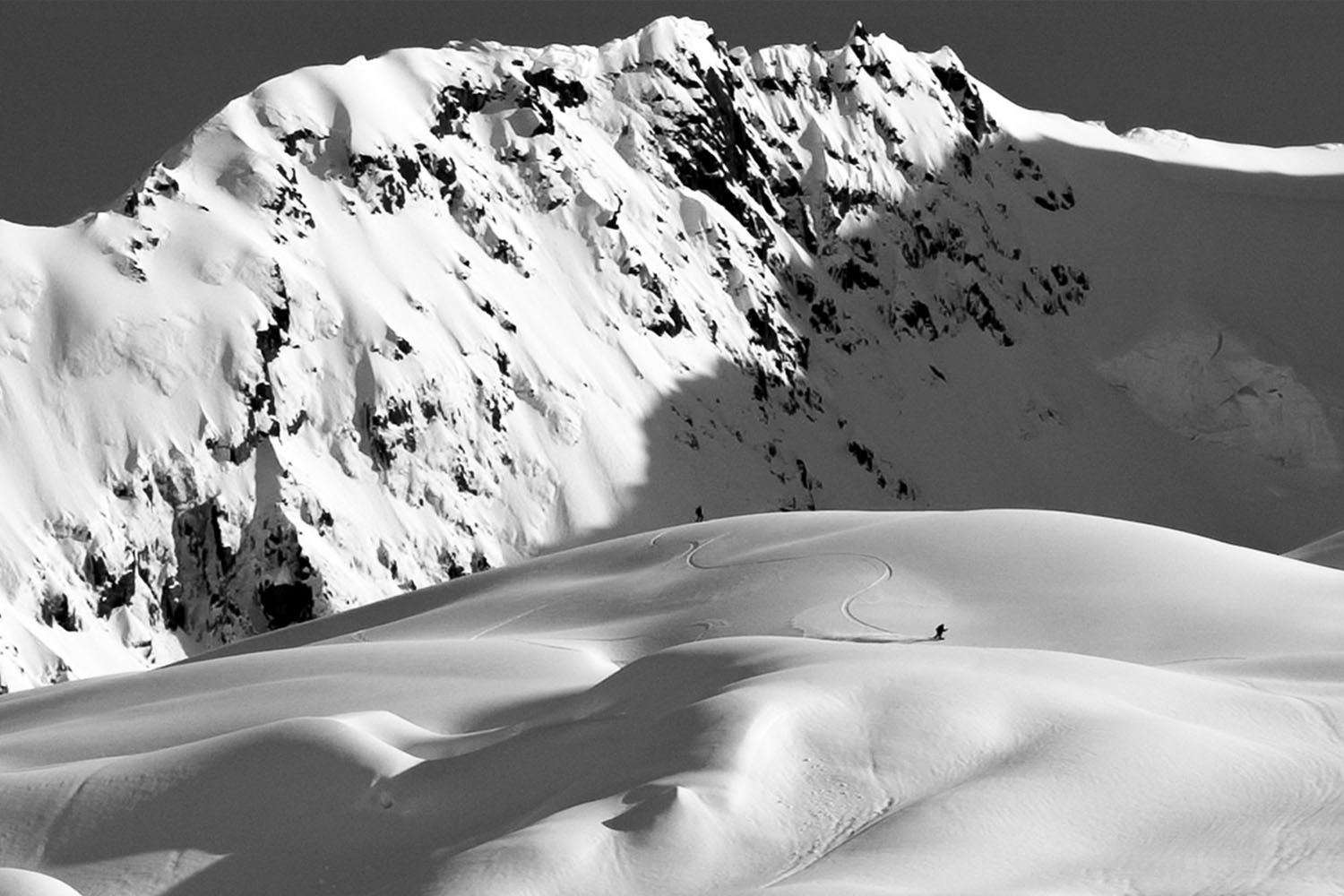 The next day we got up early, stoked for a second day of touring. To our dismay the cloud cover was heavy at 6am so we went back to bed until 9am, hoping the clouds would thin out with the rising sun. By 9am the clouds had parted so Max, Maya, Kevin and I jumped into the skintrack and headed toward the glacier. Sadly the sunshine was short lived as within minutes of stepping onto the glacier our main objective socked in with persistent-looking clouds. Looking for an alternate option that we could ride in low visibility, we decided to climb a 1,000ft couloir on the side of the glacier. Our hope was that we could get a view of the mountains north of camp from the top of the couloir.

The face we ascended was south-facing with a large apron leading toward the foot of the glacier. The snow texture was an uninspiring ice-crust, but it felt stable unless we got too close to protruding rocks. By the rocks the deeper layers were rotten and punchy. Max gracefully set the bootpack and about 200 feet up came across a caterpillar in the snow. He dubbed the line the “Caterpillar Couloir.” At about 800 ft up, the snow became much firmer, with some spots of solid ice. With some delicate moves Max and I climbed through the firm section and topped out the couloir. 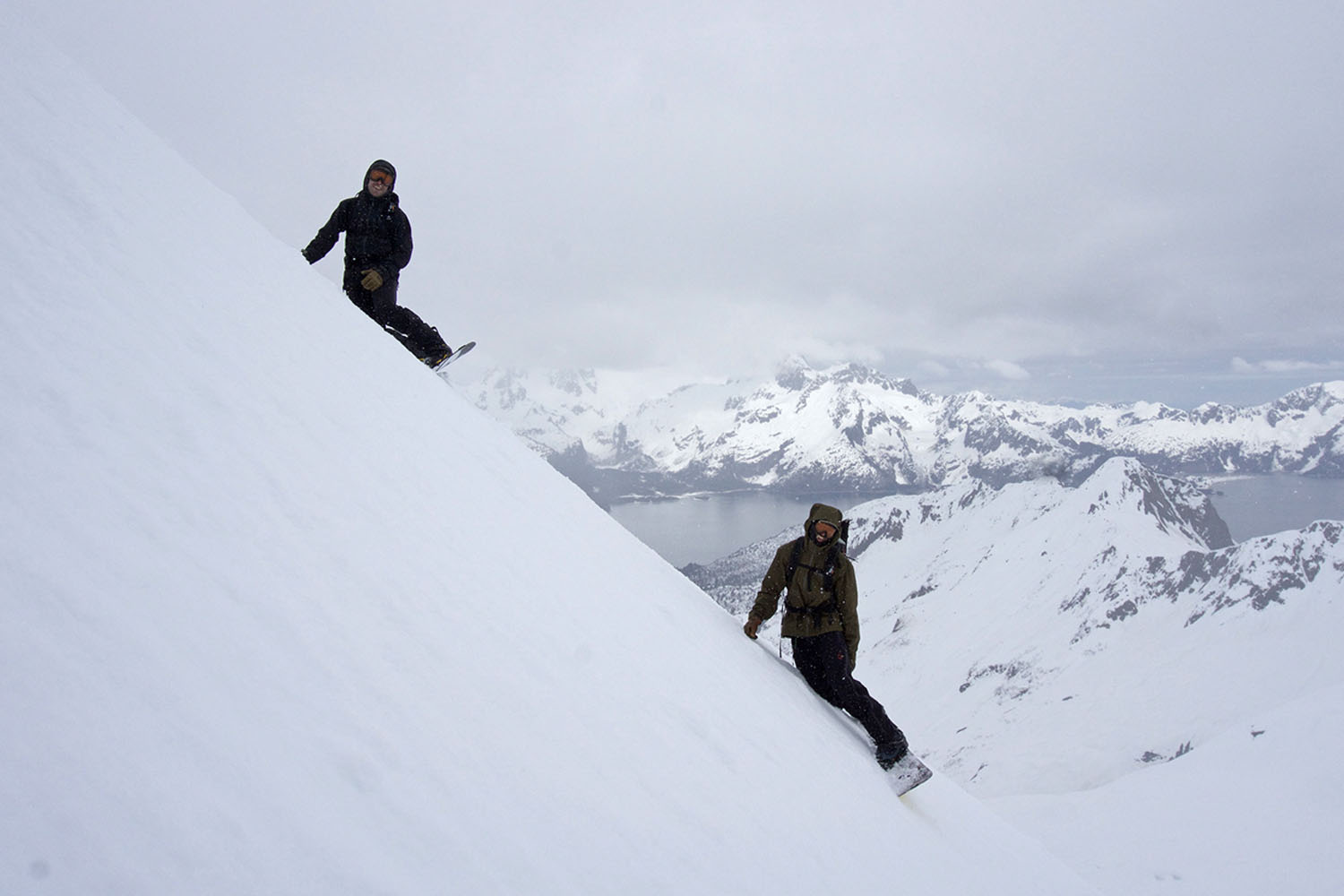 The conditions for the ride down turned out to be better than anticipated. The punchy ice crust that formed on the slush rode decently well. Once we all made it safely down the couloir, Max said, “Well there’s good snow and there’s fun snow, and they’re not always the same thing!”

We laughed in agreement, satisfied we’d made the most of a wild adventure. But a second after the laughter died, we heard a low rumble above us and turned around just in time to see a large lower part of the couloir climax slide! The slide was not exactly where we had been, nor was it in danger of hitting us, but it was close. Feeling unnerved we returned to camp. 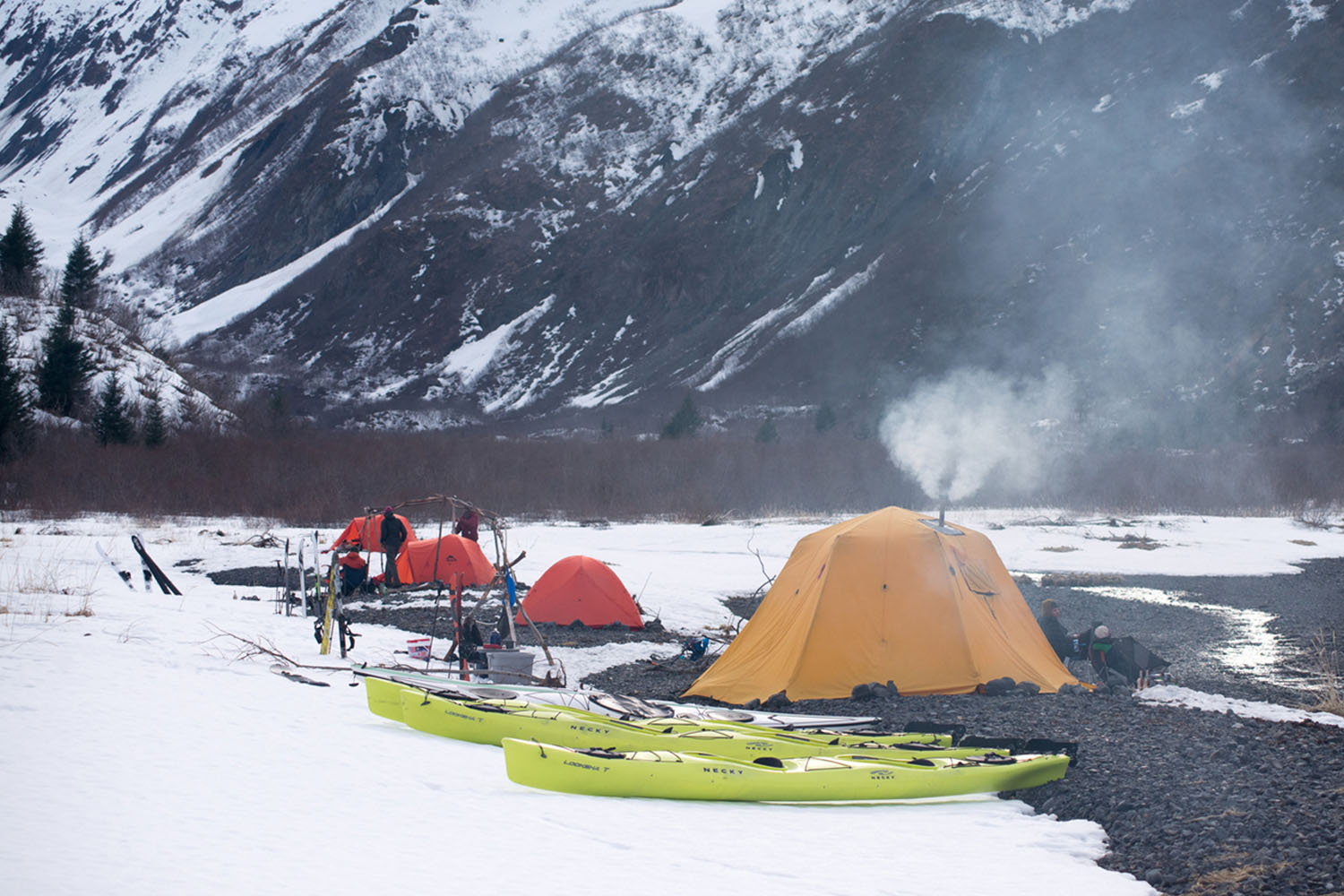 The next morning we awoke to rain. We attempted to get the wood stove tent going but soon found that the wood we had collected didn’t burn, it only smoldered and smoked with acrid fumes. Without a heat source, our gear wasn’t going to dry. First priority when the weather cleared became finding better wood at a different beach. When the sun finally came out later in the week we opted to kayak toward the mouth of the fjord where driftwood accumulates more readily. We scored armloads of yellow cedar and paddled back feeling less vulnerable to the cold and wet. 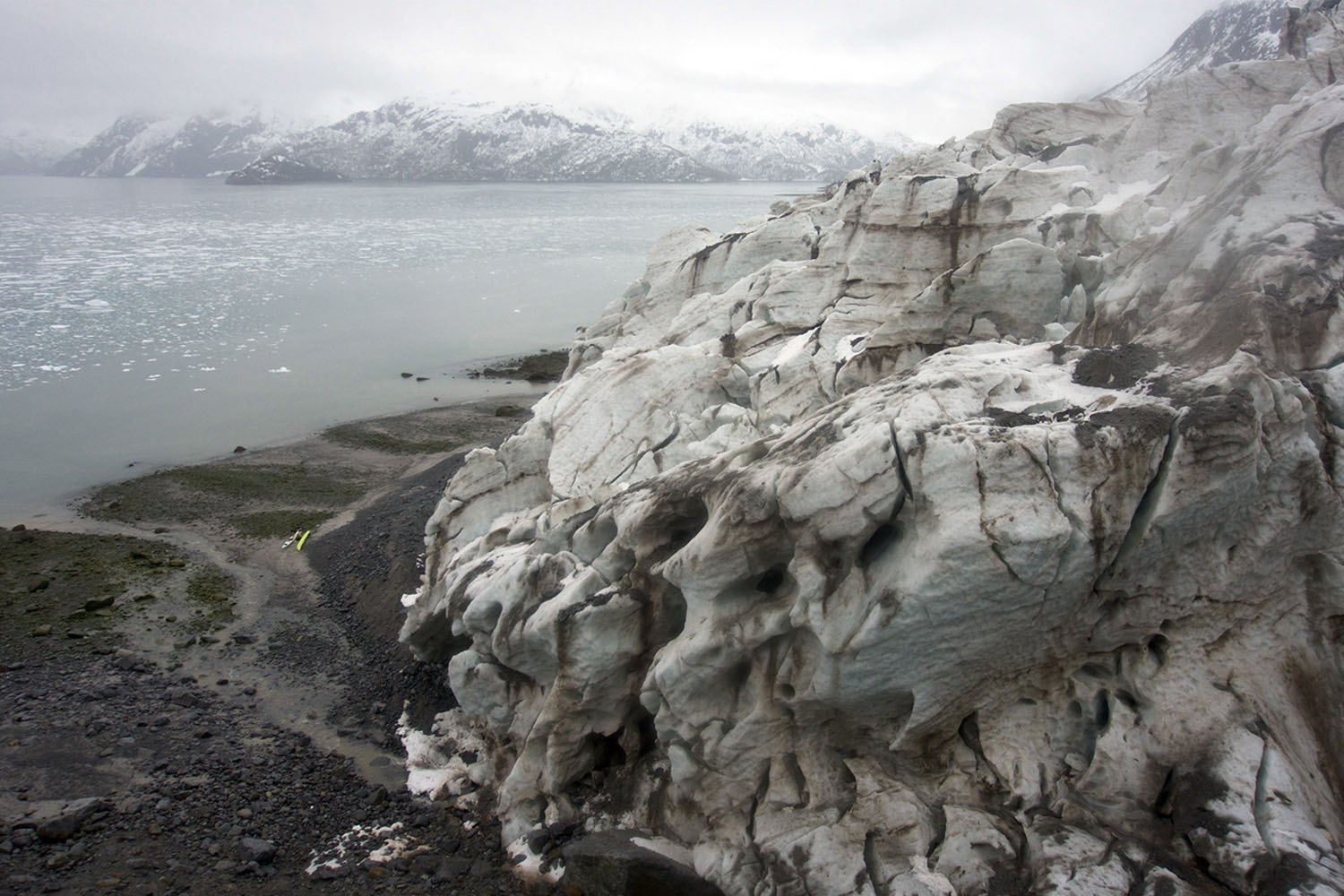 April 23rd, 2018 - We beached our kayaks at the toe of this glacier and scrambled up the boulders of it’s lateral moraine. Photo - Maya Hunger

Maya and I took to filling the storm days with any activities we could muster despite the persistent wet conditions. Twice we kayaked several miles through the inner sanctum of the fjord, passing glaciers that appear suspended over thousand-foot granite cliffs and others who’s faces meet the water in an abrupt toe of menacing blue ice. We met sea otters with new born pups, a lone mountain goat who appeared interested in our company, many harbor seals, and three coyotes. One of the days we struggled to paddle back to base camp against 30 knot headwinds while breaking a trail through thick sea ice. Despite all we could do to keep moving, many days were also spent hunkered down in the wood stove tent, drinking excessive amounts of coffee made with a hand-held espresso maker, and reading every book we brought. 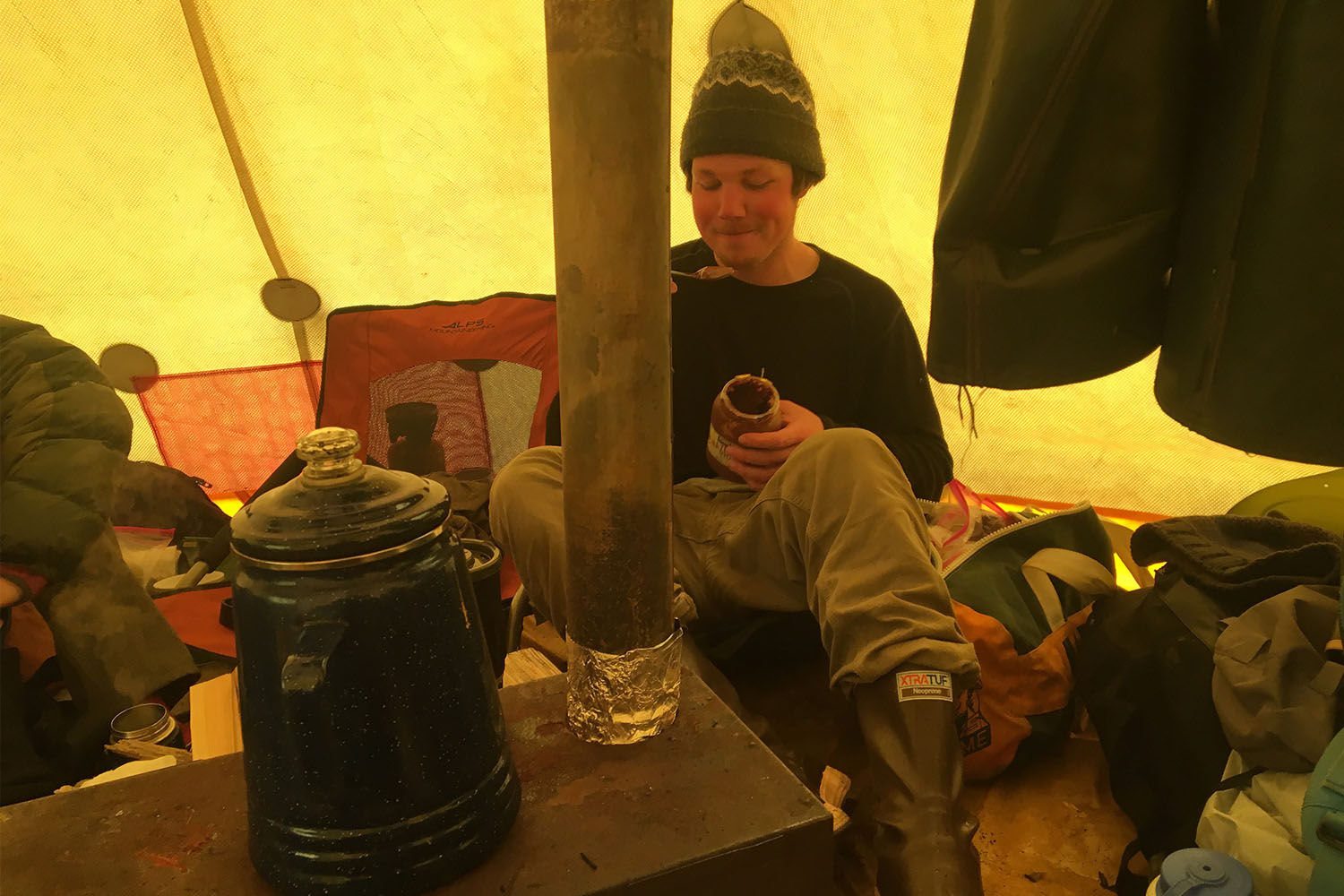 We awoke more than a few times to howling winds that threatened to tear some of our tents to shreds. The rain would turn to sleet and hail and then back to rain five minutes later. The snow behind camp ended up melting into the slushy bog we feared, and our ears grew accustomed to the roar of avalanches day and night. We estimated that more than ten feet of snow fell just above sea level during our stay. 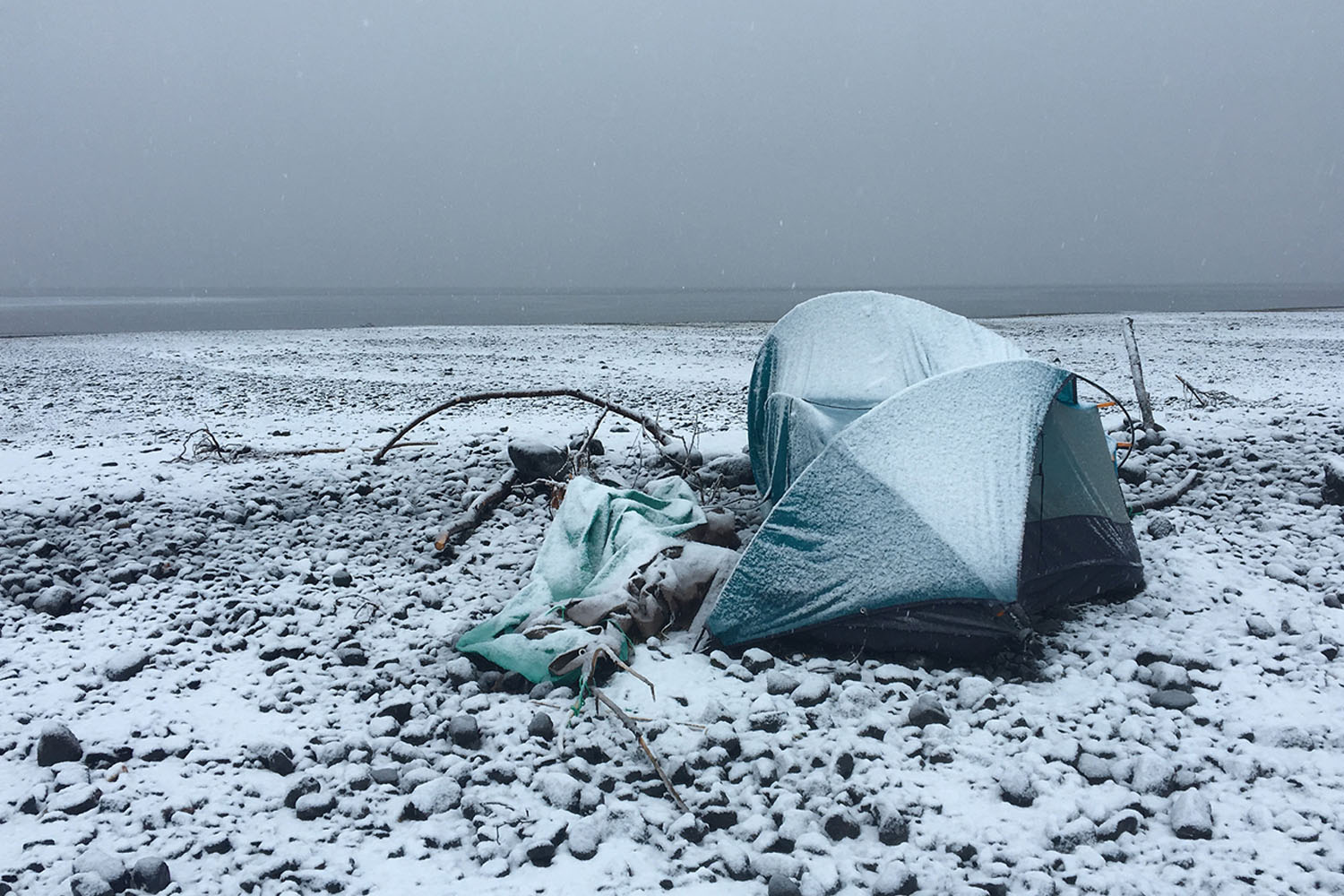 As our newly founded book club thrived, our aspiration to shred withered away. It was just too dangerous to go explore on the glacier. With the final days of our trip approaching, we just hoped the seas would shrink below ten feet so that the water taxi could come get us before another storm rolled in. On day thirteen (one day early), the water taxi appeared and we motored out of the fjord, back toward Seward.

All in all, we feel that the trip was a success. Even though the turns were limited and the snow conditions weren’t epic, the location we found is spectacular, with ideal access if the conditions are right. And most importantly, we now have a much better understanding of the zone. Because it’s not a matter of if we will come back to explore the Northwestern Fjord, just when. 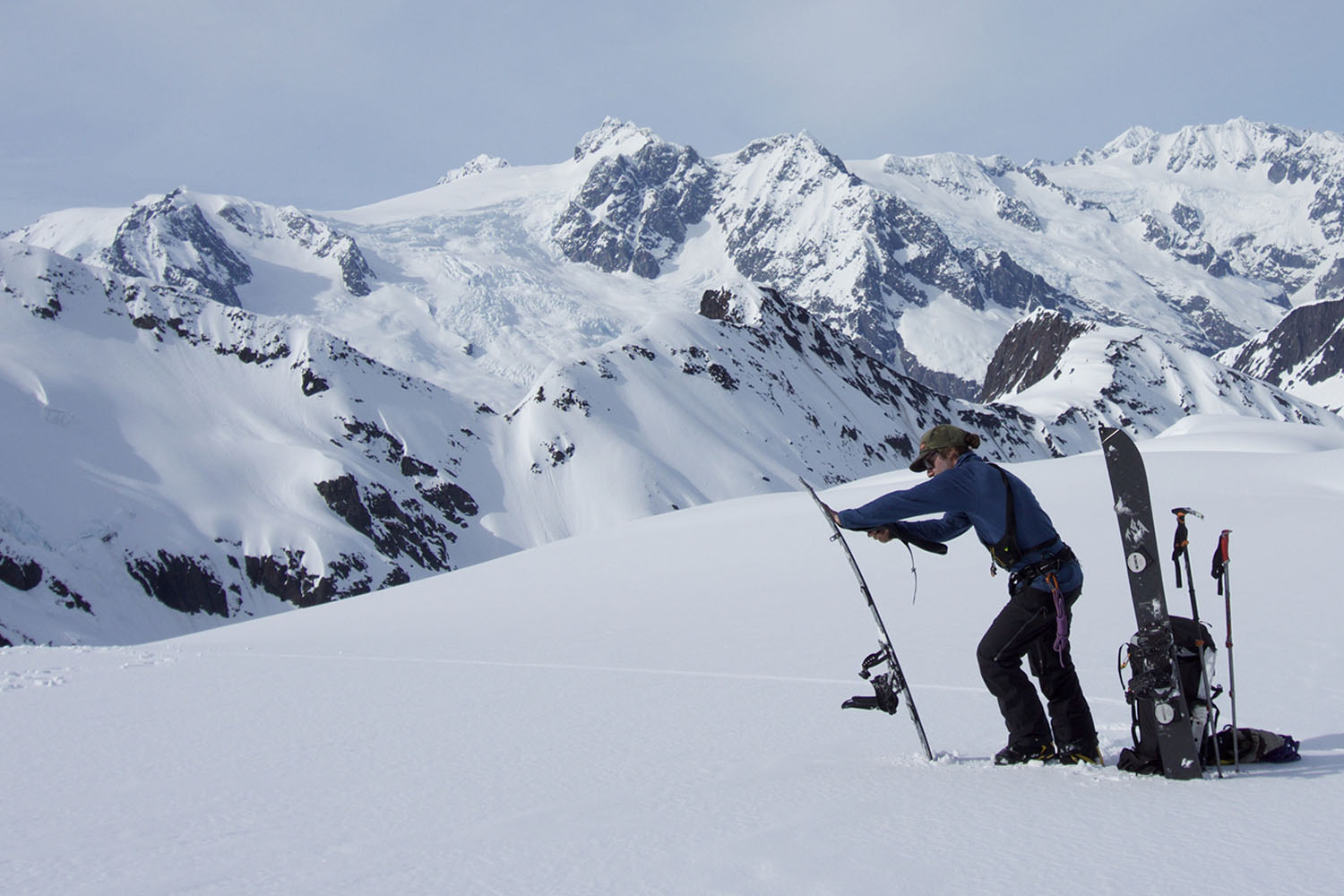 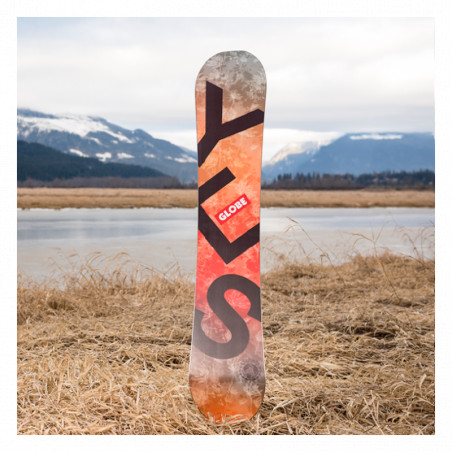 The all-terrain, shred everything split