Trusting your instincts: The Death Couloir with Nick Russell 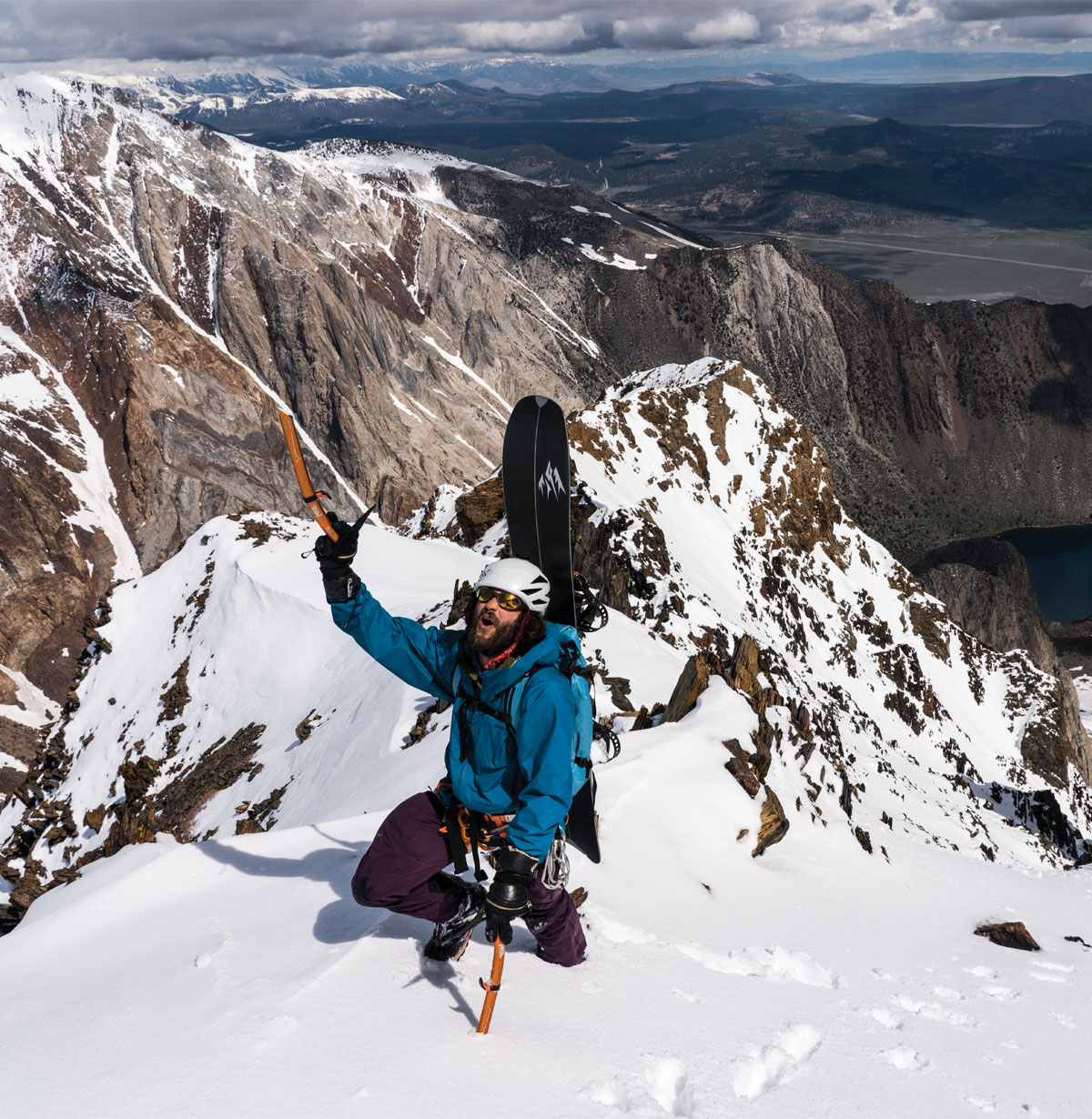 Am I just nervous or should I listen to my gut?

Jones ambassador Nick Russell has been cutting his teeth on rowdy, exposed backcountry lines for many years now. With first descents to his name in Bolivia, India and the US, you might think Nick has outgrown any pre-game anxiety before embarking on heady alpine missions. Not so much. Nick, like many veteran explorers, has learned to listen to his butterflies and uses intuition and gut feelings more than ever to make decisions on when to go and when to bail.

In May 2019, Nick and his partner Christian Pondella set their eyes on climbing and descending a long sought after High Sierra line called the Death Couloir. Trickling down the imposing north face of Mount Morrison near Mammoth, California, the Death Couloir gets its name from the notoriously loose rock on Morrison’s North Face. Rockfall and avalanches routinely barrell down the narrow chute and explode off the 200 foot cliff that guards the bottom of the line. It took Nick and Christian three attempts, but in the end they safely rode this heavy line by listening to what their instincts were telling them about the mood of the mountain on a given day. Nick and Christian’s patient success is a great learning lesson so we caught up with Nick to give us the rundown on how each chapter of their adventure on Mount Morrison went down. 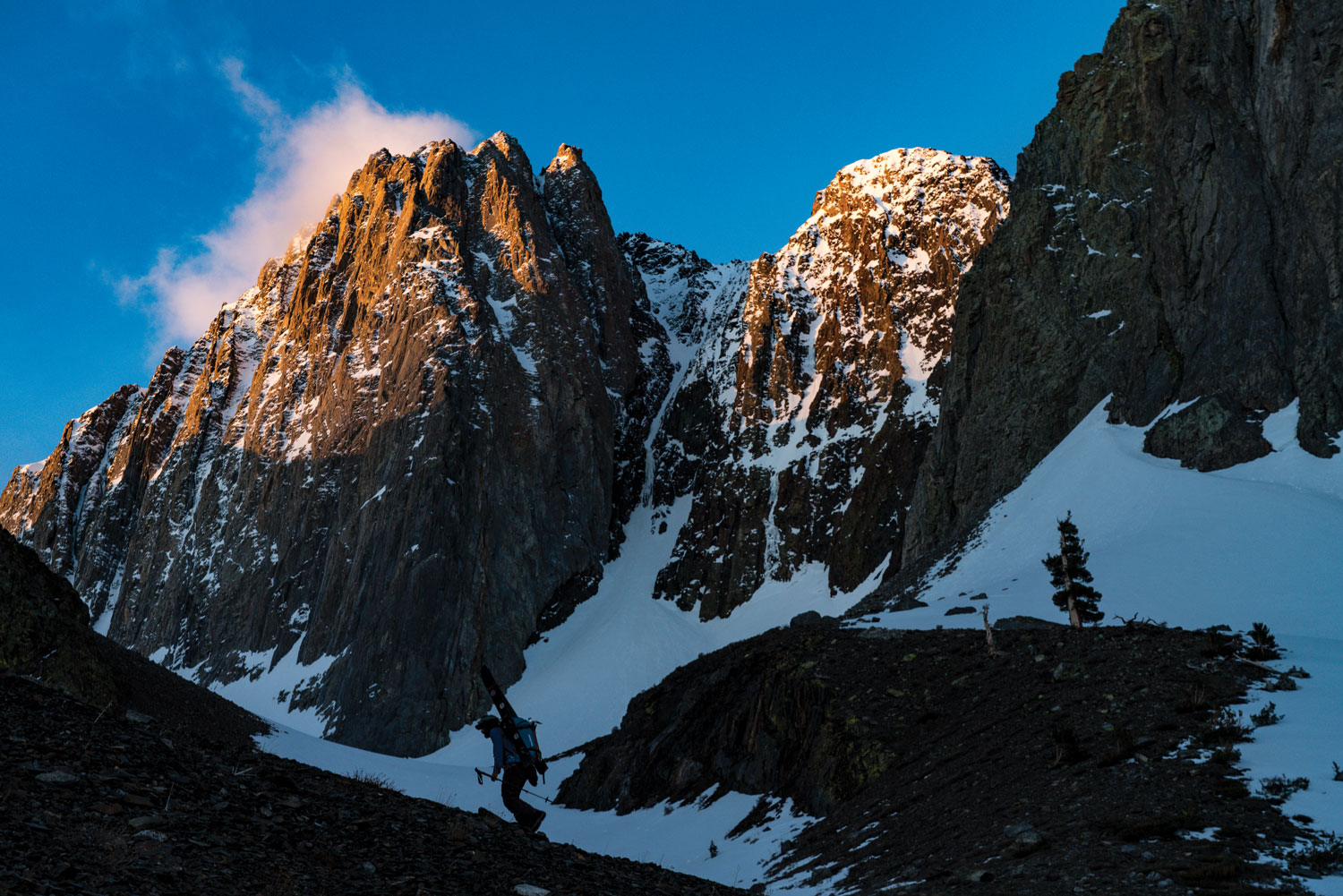 Rising high above Convict Lake, Mount Morrison dominates the skyline just south of the town of Mammoth. Records indicate that the peak was first climbed by either Norman Clyde or John Mendenhall in 1928, presumably via its eastern flanks. Its trademark characteristic is certainly the seemingly impenetrable northeast face, split by a steep, thin Y-shaped couloir ending in a large cliff - the Death Couloir.

Despite the obvious objective hazards, for anyone obsessed with dissecting fall line weaknesses, the Death Couloir’s beauty is simply undeniable. It took several years of driving by it and the right mindset before actually viewing the couloir as a viable riding option. Beyond dreaming it was possible, the next crux was waiting for the perfect conditions when both the bottom ice cliff and the snow-filled couloir were in safe condition to climb. The bottom ice cliff needs to be thick and solid for safe ice climbing and the snow in the couloir needs to be perfectly stable as the line is exposed to hangfire from the south facing side of the chute. If a pocket ripped in the couloir while you were climbing up you’d be washed down the gun barrel to certain death.

With no clue whether the route had been skied before, or if it was even possible, I put in a phone call to photographer and Mammoth local Christian Pondella. If anyone would know about the line it would be Pondella. As it turns out, Pondella had climbed the line in 1998, but did not descend it because they didn’t have the right gear to rappel off the bottom cliff. He was fired up to make another go at it, so we hatched a plan to begin scouting conditions for an attempt later that spring. 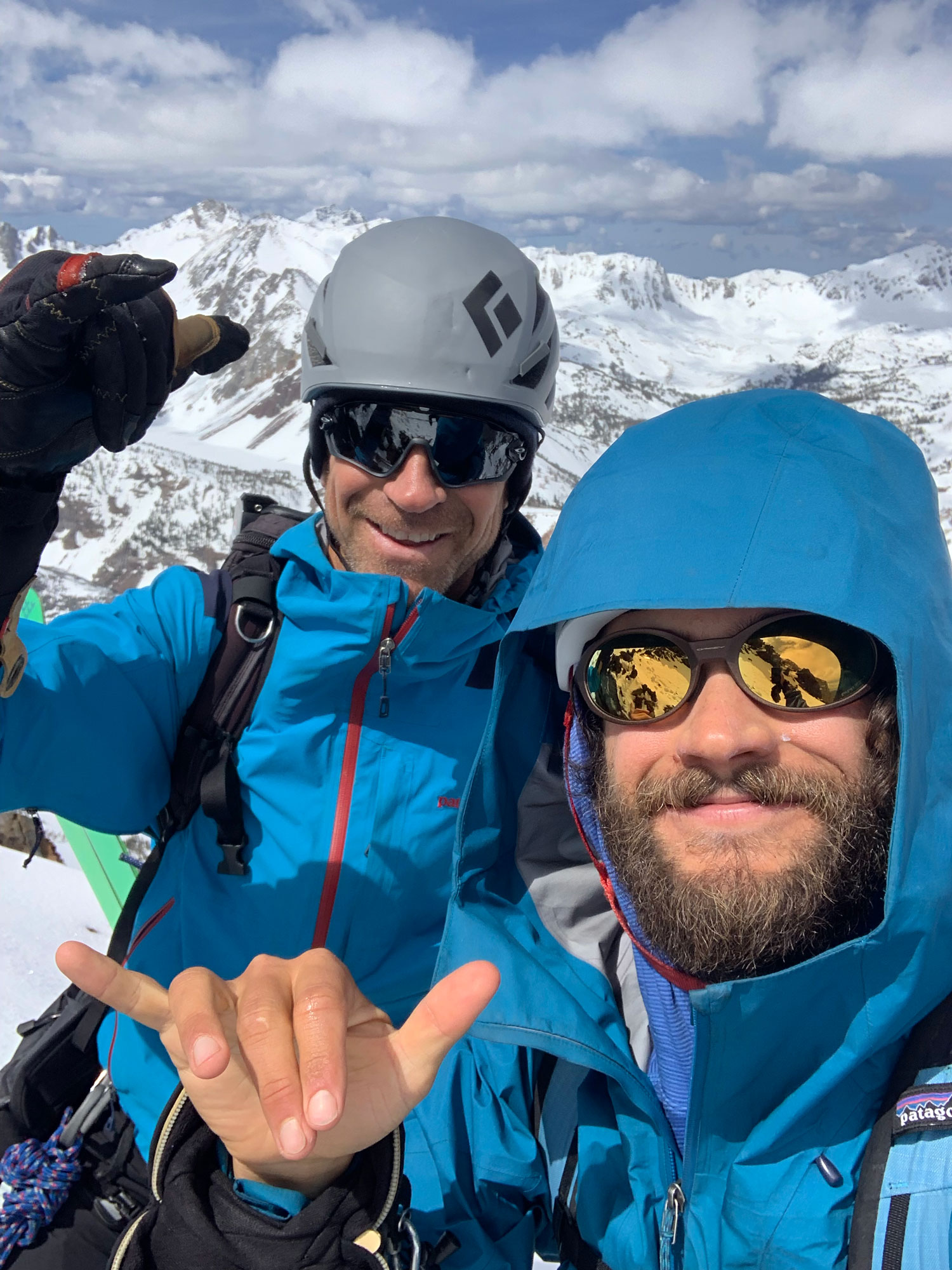 A lot of times I get these weird gut feelings before big days in the mountains that are unexplainable. Sometimes I shake them off, knowing it’s just nerves or anxiety, other times I listen and back off. Our first attempt at the Death Couloir it was extremely clear which path to choose.

I was camped in my truck at the trailhead the night before we were supposed to climb the line. Pondella was set to meet me at 5am the next morning to start the mission. Crawling into my sleeping bag I got a weird feeling that was different than anything I had felt before a big adventure. It was a weird sense of foreboding. I noted it, but with nothing to be done about it, I settled off to sleep.

Not long after falling asleep I had another experience that I’d never had before. I was visited in a dream by a young woman, who whispered to me, “Turn around.” Right after she said this, I woke up with a shock as my truck started rocking violently in the wind. No sign had ever told me to bail so vividly. Right then and there I decided we weren’t going up that next day.

Two weeks later we made our second attempt. It had been snowing pretty consistently the week before, but only a couple inches at a time, no substantial dumps to warrant any alarming avalanche danger. Mount Morrison had been in the clouds for most of the week though, so we didn’t really know how much fresh snow might be up there. Hoping there might be just the perfect amount of stable snow, we decided to go have a look, and climb up to the base of the ice cliff to see what it really looked like.

As we were climbing up in the pre-dawn hours, we started to notice gentle spindrifts cascading down the rock face. The closer we got to the base of the ice cliff the more the spindrifts grew in intensity. Arriving at the base we spent a good twenty minutes debating whether it was safe to climb. Just as we decided to rope up and give it a try, a massive spindrift avalanche came crashing down above us. We clung to our boards and dove for shelter in the small cove as a massive cloud of snow engulfed us.  Needless to say, we instantly bailed and made it across to the opposite side of the drainage just in time to see another even larger pocket rip out in the couloir. Had we been climbing, this natural avalanche would have surely blown us off the mountain.

Two strikes down. I began wondering if this line was really meant to be. What if our ambitions are greater than the boundary of reasonable safety? Perhaps the line remains forbidden fruit for good reason?

Had the weather not played along I would have likely given in to these feelings and let the line rest until another season. But just a couple weeks after our second attempt, the line was still in and conditions seemed perfect for a shot at redemption. The fresh snow had been flushed out and consistent cloud cover had guarded the line from rapid warming.

Once again, we started well before sunrise on the third attempt. Gaining the base of the line the ice cliff looked solid and there was no spindrift coming down. The conditions gave us confidence that this was finally the right day to give it a go.

Pondella led the climb up the ice cliff and I followed. By the time I got to the top of the pitch there was a constant stream of water running down the left side of the ice fall. Temps were warming, not super rapidly, but quickly. Gaining the couloir itself the snow was perfect - settled boot top pow, no sluff, perfect steep climbing snow. Confident in the stability of the snow, we kept climbing, knowing we had to move fast.

Reaching the summit ridge was a huge relief as we knew from climbing up that the descent would be exhilarating, but manageable. Dropping in the snow was perfect for shredding. We leap frogged each steep pitch, going back and forth, pulling out into each little island of safety, taking turns opening it up. Creeping closer and closer to the rappel, the line steepens out quite a bit and really becomes a no fall zone. Our turns got more conservative until we reached the rappel spot and anchored in for the 200 foot rappel back to solid ground.

Nothing in life worth pursuing comes without struggle and self-doubt. There will always be elements beyond our control that dictate a route, but by learning to tap in and listen to our own feelings and the surroundings, there is no limit to what you can accomplish. 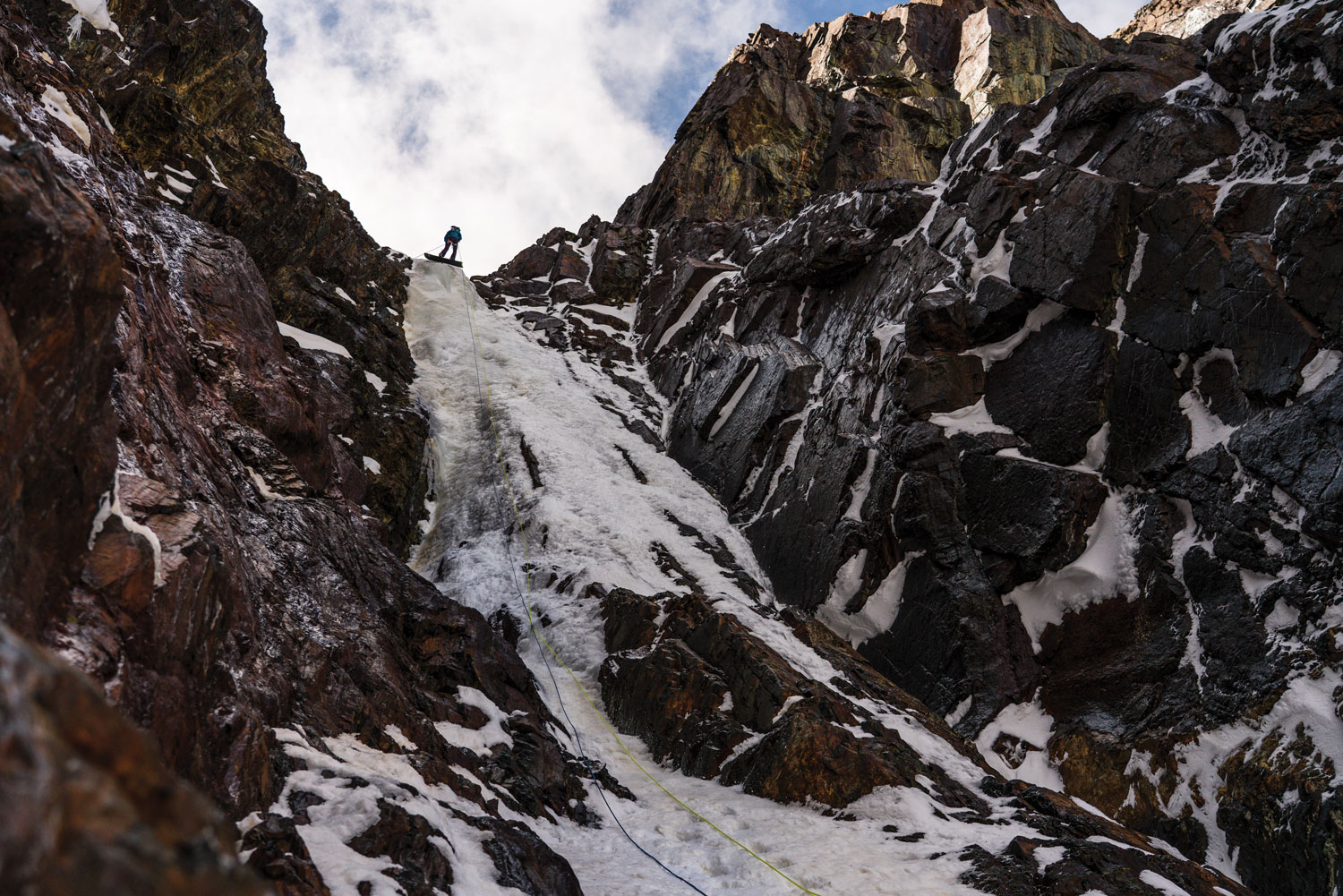