How to: Ascend in avalanche terrain on a splitboard 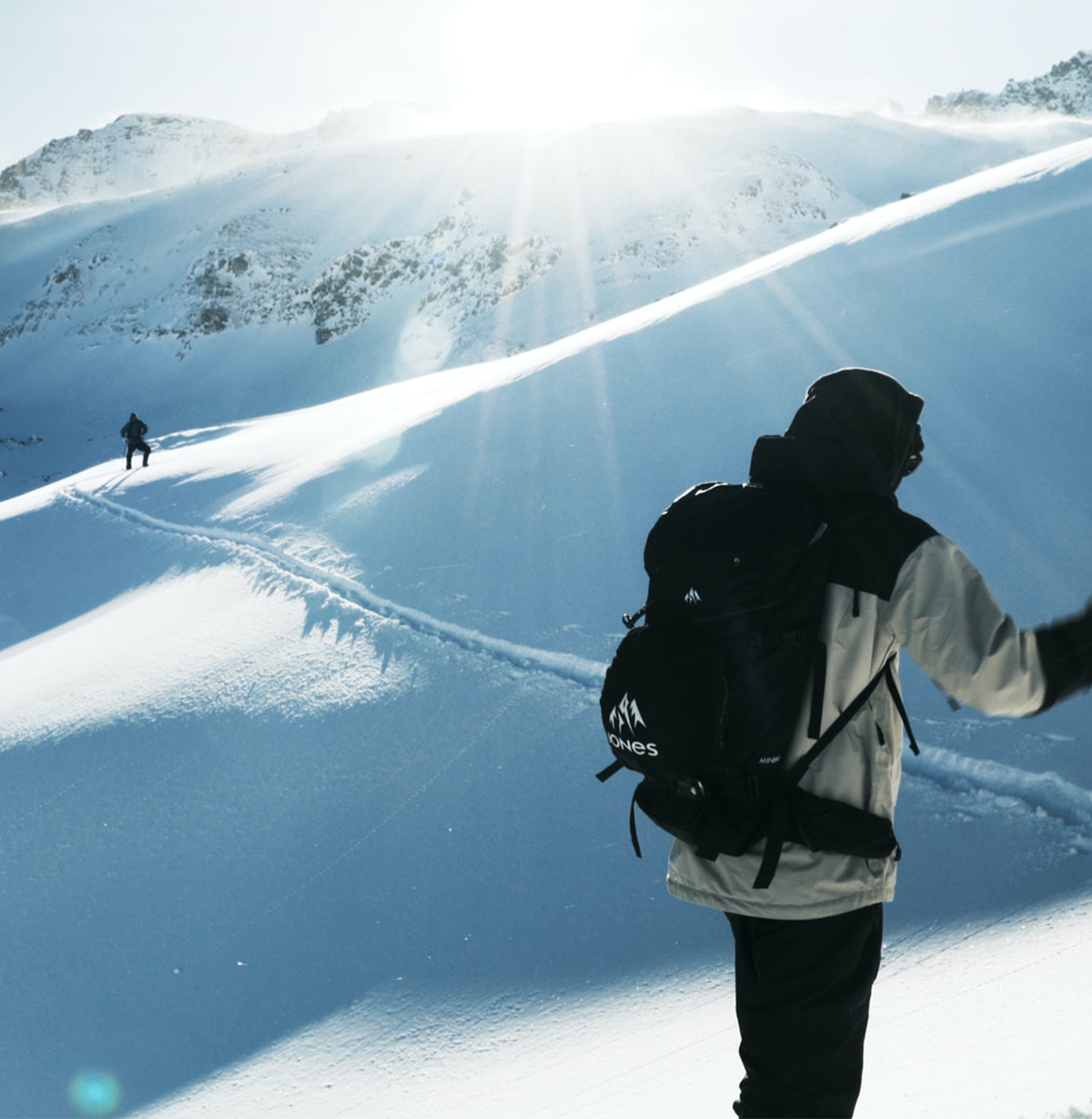 Above: Moving safely, one at a time, through potential avalanche terrain on a splitboard

The appeal to ride outside the resort boundaries needs little justification. Untracked, pristine powder faces and endless opportunities to score dream lines away from the chairlift queues are reason enough. But splitboarding in the backcountry comes with inherent risks. Away from the confines of the ski resort means moving through an untamed, mountain environment, with the potential for things to go south in a matter of seconds.

Safe decision making and avalanche awareness are vital skills. Especially as many of the risks may be hidden from plain view.

Naturally, avalanches pose one of the biggest risks. When ascending in terrain that has not been controlled by ski patrol on a snowpack that has potentially remained unridden all winter, safe decision making and avalanche awareness are vital skills. Especially as many of the risks may be hidden from view.

We’ve teamed up with Jones Snowboard Ambassador and UIAGM Backcountry Guide, Neil McNab, to look at how to increase your awareness when ascending in the backcountry and use safe travel practices to mitigate the risks.

It’s a big world out there. The mountains offer endless terrain to explore, but being able to identify the dangers and safely navigate them is one of the most important skillsets for any splitboard enthusiast. The rule is simple, follow the easiest and safest path through the terrain to reach your objective. In reality, there’s a huge amount of variables to consider.

The angle or steepness of the slope is a fundamental consideration with avalanche terrain. The potential for the snowpack to release is extremely sensitive to a small amount of change. The prime angles for a release to occur on are between 34-45°. On more gentle slopes, gravity has less effect on pulling the snowpack downhill; on steeper angles, the snowpack tends to regularly “sluff” and prevent larger accumulations of snow. Regardless, there are multiple other factors involved, so every slope angle should still be approached with caution.

The prime angles for a release to occur on are between 34-45°. 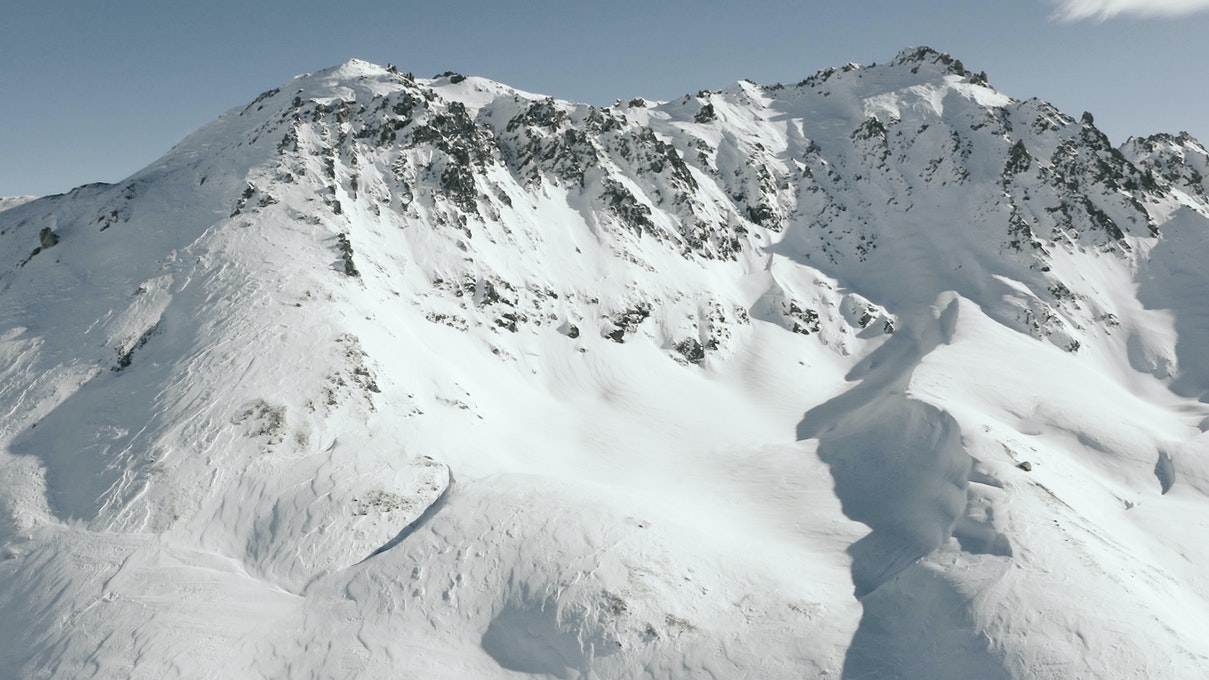 Most avalanches occur on slope steepnesses between 34°-45°.

It’s not just where you’re stood or where you intend to go that matters. The backcountry is full of natural terrain traps and hazards that need to be identified and avoided long before you’re faced with them. A seemingly safe zone might be locally connected to far more dangerous terrain and, should the worst happen, you could find yourself pulled towards it.

Seemingly safe terrain could be connected to far more dangerous terrain and, should the worst happen, you could find yourself pulled towards it.

Look above you. Have cornices formed on the slope above? Are you skinning at the bottom of a face that is supporting a steeper, avalanche-prone slope?

Check beneath you, too. If an avalanche occurred where you stood, would it flow into a terrain trap such as a gully, or ravine? Or, is there more serious exposure beneath, like a cliff band? Always be asking yourself what the worst-case scenario might be should you be caught in a slide. You’ll quickly start to build a healthy respect for the mountains and make smarter choices in your route selection. 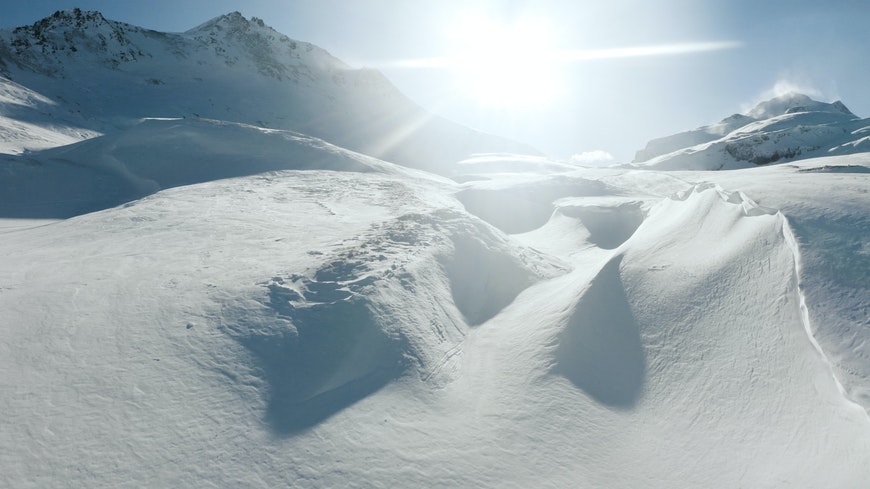 Avoid traps, such as gullies, when ascending on your splitboard.

The risks surrounding the aspect of the slope will be primarily determined by two things: the sun and the wind direction. In both cases, ascending on a leeward facing slope (the side that deposits windblown snow) or one that is either affected by the sun’s exposure (or, indeed, lack of exposure) will have a significant effect on the stability of the snowpack.

Further still, the time of year often affects the risks associated with certain aspects. For example, in the Northern Hemisphere, a south-facing slope will warm far more rapidly with increased sun exposure in the spring, potentially saturating the snowpack and increasing the avalanche risk.

On the other hand, some north-facing slopes may see almost no sun exposure during the early months of the season. That prolonged cold could prevent the snow layers from effectively bonding and be hiding a persistent weak layer. 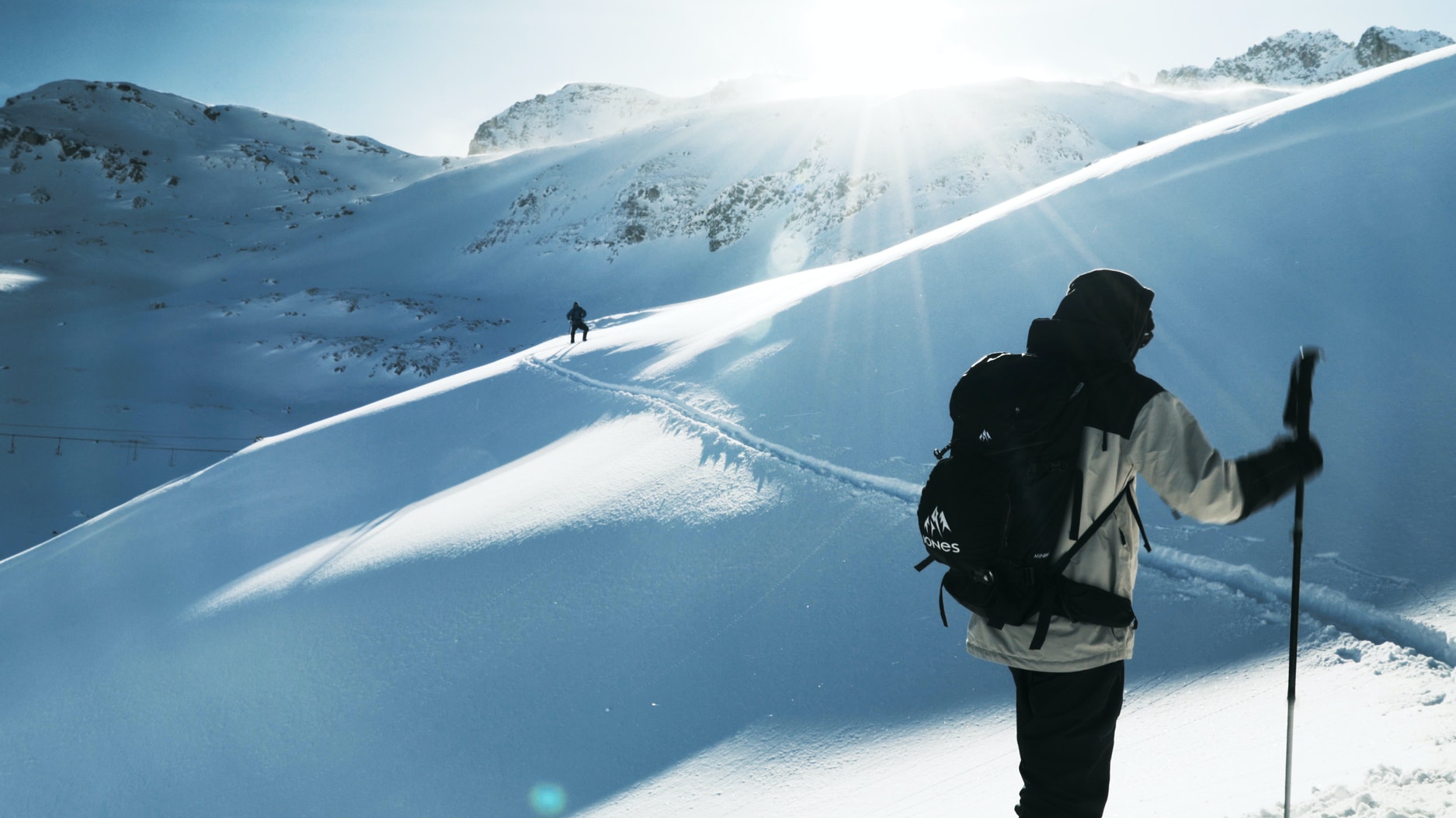 Changing aspects and crossing suspect slopes should be approached with caution. Move quickly, one at a time, and maintain a line of sight.

While risks in the backcountry are never absolute, you will generally find more factors contributing to the likelihood of an avalanche at higher altitudes. More wind, more snow, steeper terrain, and fewer anchors in the slopes (such as trees and bushes) will all have a detrimental influence on the stability of the snowpack.

Paying close attention to the avalanche reports and weather forecast will help to inform your decision as to how high or low you tour for the day.

That said, in some cases, it can be more dangerous at lower altitudes. Full-depth slides can occur on lower altitudes as the warmer temperatures cause the snowpack to saturate and release en masse. Paying close attention to the avalanche reports and weather forecast will help to inform your decision as to how high or low you tour for the day. 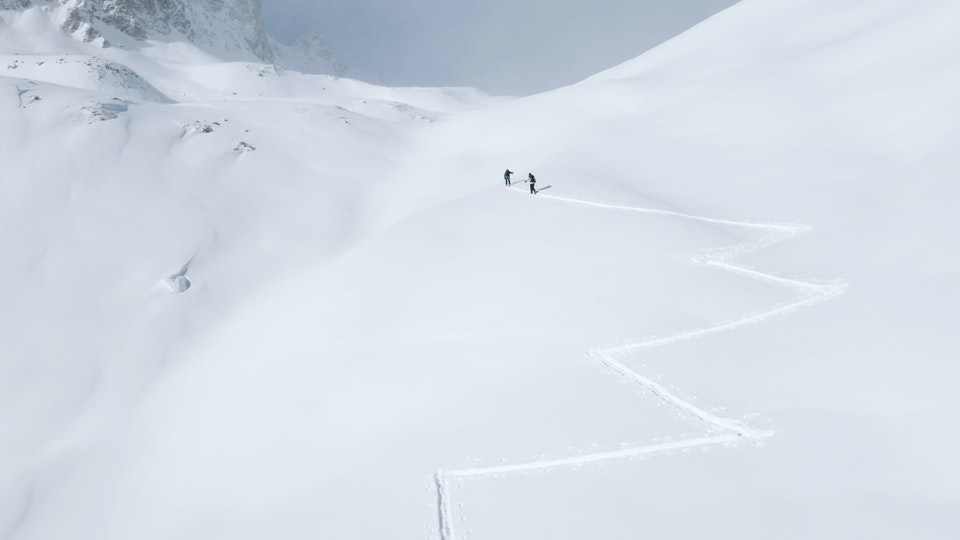 Taking the easiest and safest line up the mountain.

With these considerations in mind, it helps to have a checklist of what to be on the lookout for when ascending on your splitboard. Jeremy Jones himself has his own checklist to be aware of. So, if it’s good enough for him…

If the wind is strong enough to transport snow then the avalanche conditions can change from stable to dangerous without any new snow. Watch for blowing snow on high ridges and beware of wind loaded pockets at the top of faces and chutes. 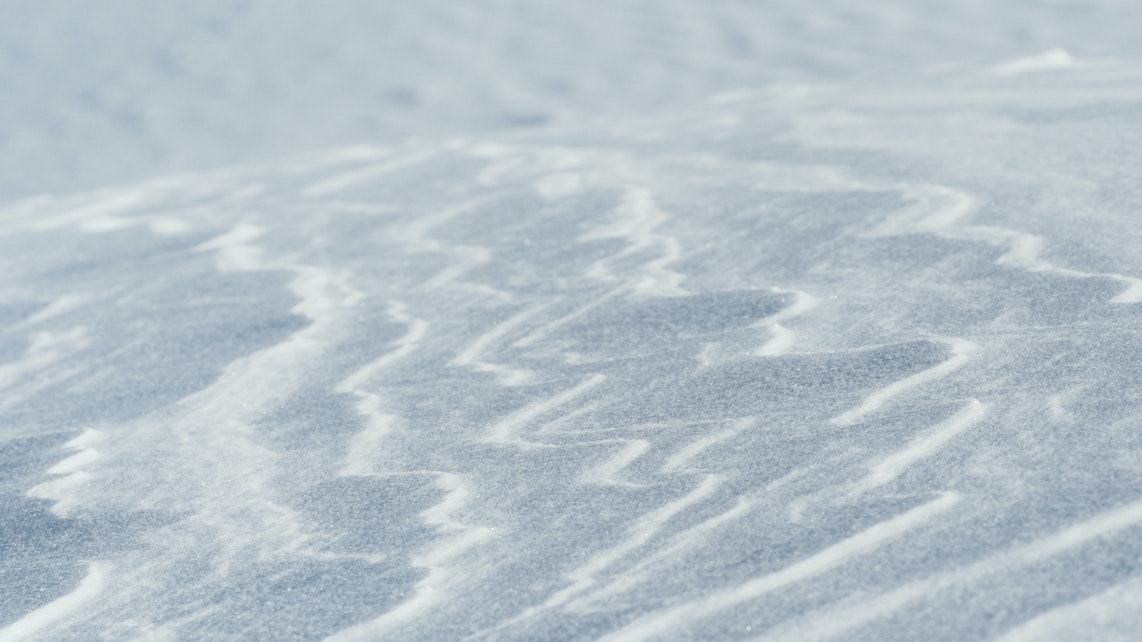 Sastrugi gives clues to the prevailing wind direction and where the suspect slopes may be.

No matter the starting temperature, any rapid warm-up is dangerous because the snowpack does not have time to adjust to the temperature change. Take extra precaution on the first warm day after a storm cycle.

Collapsing or cracking in the snowpack

If you feel the slope collapse under your feet or hear whomping sounds this is a sign of unstable layers in the snowpack. Cracks may also shoot out from your skis or board as you skin or ride in fresh snow. These are all signs of dangerous snow layers. 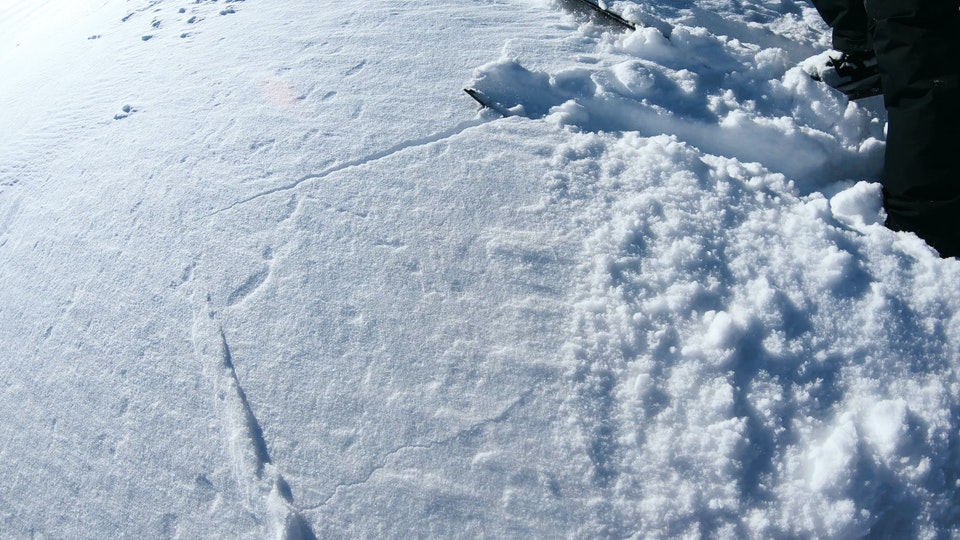 Look out for cracks in the snowpack or “whoomphing” sounds when you’re ascending.

Ignorance is far from bliss when it comes to splitboarding in the backcountry. There are endless complexities and variables that can change over the course of a season, a day, or even in a matter of minutes with big consequences.

Building awareness and an ability to read the environment and snow conditions only comes with time in the mountains. It takes years of experience to build up the knowledge required to safely venture off-piste, and it is essential to go with a guide if there is insufficient experience in your group.

Back to splitboarding hub