Vanishing Lines - Mitch Tölderer Speaks Up for Wilderness in Austria 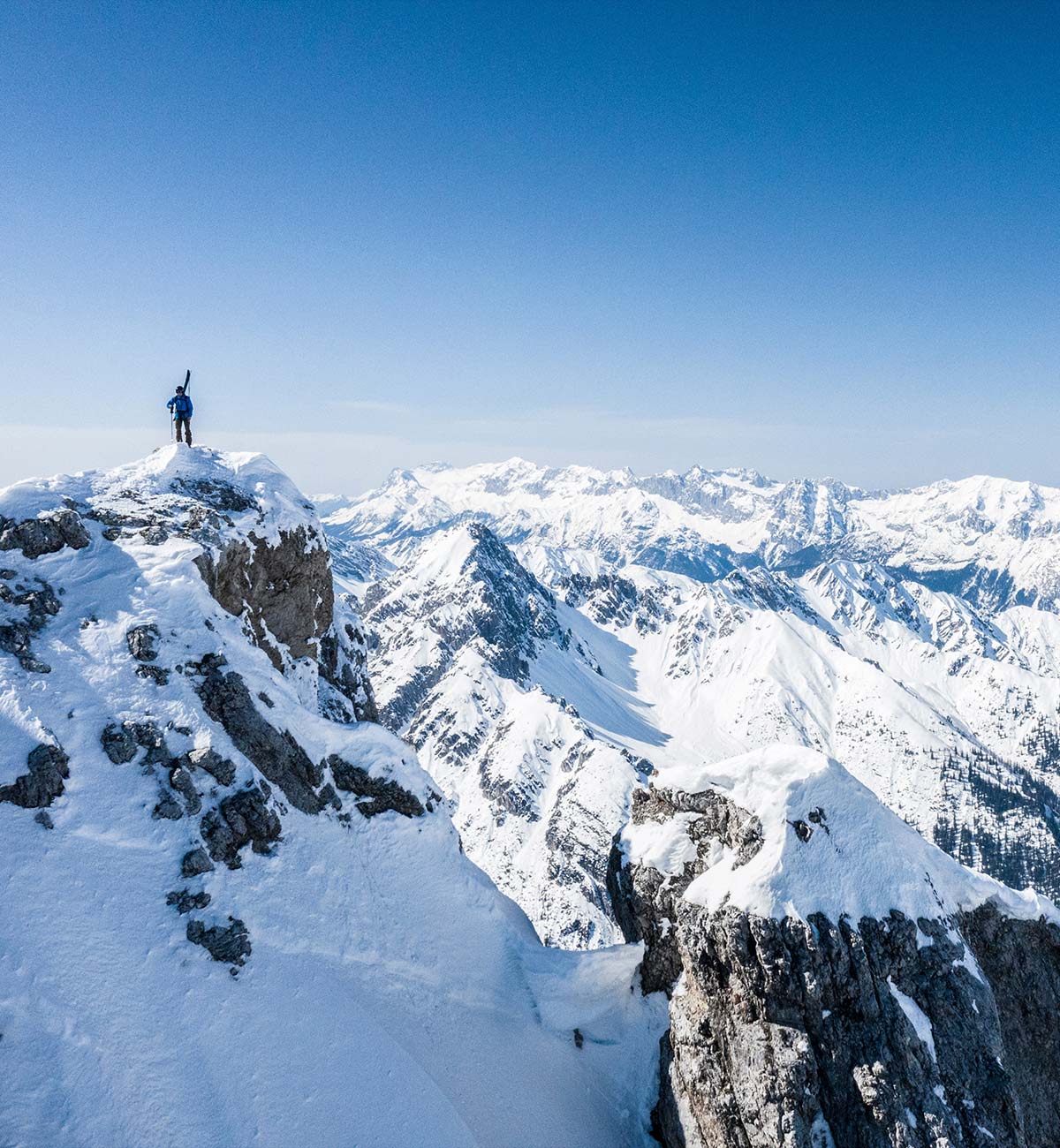 Jones ambassador Mitch Tölderer has been exploring the pistes, valleys and summits of the Austrian Alps for over thirty years. From his early days ski racing as a child, to a long career as a pro snowboarder, Mitch has seen a lot of changes in his home range during this time, including shrinking glaciers and ever expanding ski resorts.

As Mitch started focusing on splitboarding a decade ago he quickly realized how few alpine valleys in Austria were not already developed, and what little wilderness remained was continually under threat for future development. He also recognized that local people did not always support the new developments, but they felt powerless to speak out about it because their livelihoods were tied to the resorts and tourism.

When a new ski resort was proposed for a still undeveloped valley near Mitch’s home it inspired him to begin working on a film project that would speak up for protecting the remaining wild places in Austria and throughout the Alps. With the support of Patagonia and Jones, Mitch produced Vanishing Lines, a new film that questions what life would be like without wild glaciers, and how many ski resorts do we really need?

In celebration of Vanishing Lines release, we caught up with Mitch to hear more about the film’s inspiration, and further details about the resort development plans he’s helping fight. Watch the full length film below, and read on to hear how you can help protect wilderness in your backyard.

What inspired you to start the Vanishing Lines film project?

A plan to build a new ski resort in the Malfon Valley in the Arlberg region of Austria was the original inspiration for the film project. Splitboarding in this still untouched valley made me realize how important it is to protect what little wilderness we have left in Austria.

What is the current status of the Malfon Valley project?

The Malfon Valley resort project was approved by the government of Tirol in 2015, but the Austrian Alpine Club and the provincial environmental advocate filed a complaint to the Austrian federal administrative court. After two years in court, the project was finally rejected at the end of 2018. Seeing how hard it was to block the Malfon project inspired me to create this film concept that would help raise awareness about future plans for resort development in wilderness areas.

Why is resort development such a contentious topic in Austria?

Speaking out against resort development, or tourism in general, is difficult for many local people because no one wants to cause trouble with the resorts that provide them their business. Even ski guides who use the wilderness areas with their clients are often afraid to oppose the resorts. So that was one of the primary goals of the film - to bring up the topic of wilderness preservation within the European backcountry community, and unite our community outside of any business to help stop future projects in undeveloped areas. The film is not against ski resorts, it’s about preserving what few wild spaces that are left. The Austrian Alps are already developed enough, especially considering the amount of skiers is declining, and the glaciers are shrinking. Only 7% of Austria is still considered wilderness, and all of that land is in high alpine areas. We can’t afford to lose any more. 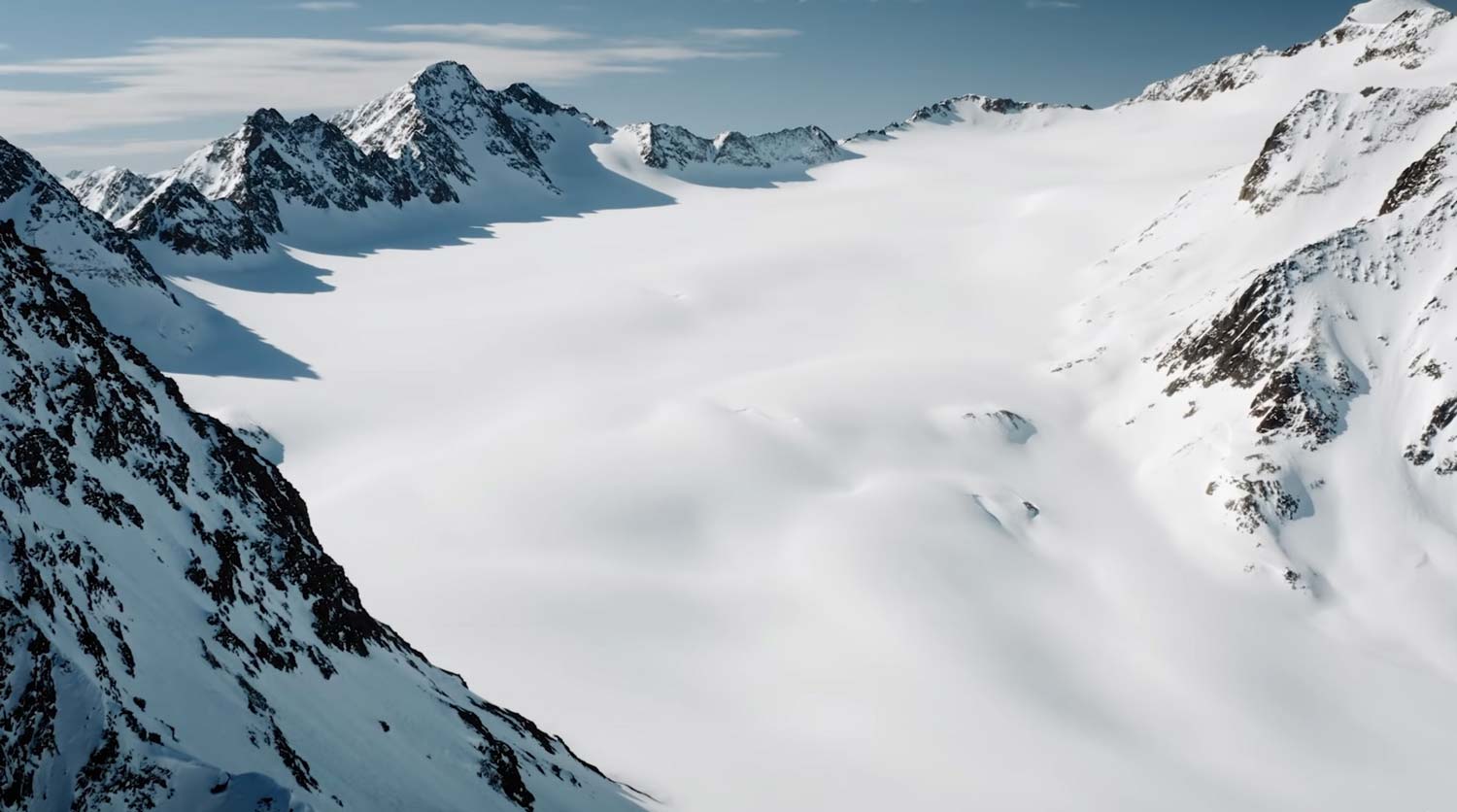 The Pitztal - Ötztal connection project would build three ski lifts, a water reservoir and four km of roads in this glacial terrain.

What is the most concerning resort development plan in Austria right now?

Of the many pending resort development projects in Austria right now, the plan to connect the Pitztal and Ötztal Valleys is the most critical to raise awareness about because the destruction of an untouched glacial area would be so great. The two already massive ski resorts in these valleys want to connect and become the largest glacial ski resort in the world. The planned expansion would stretch from Mittelberg in Pitztal, over Griestal, and up to the Linker Fernerkogel, a pristine mountain with three glaciers. The initial project plan included three new ski lifts, a three-story ropeway station, an asphalted water reservoir, a huge artificial snow system, more than four kilometers of new roads, the leveling and removal of ice on 72 hectares of glacial terrain, as well as the grinding down of a mountain ridge by 40 meters. If this construction is allowed it would destroy this glacial landscape beyond repair, and cause the total loss of many wildlife habitats.

What is the current status of the Pitztal - Ötztal project?

The independent environmental review of the first development plan found that the project would have a significant ecological impact which led the resort developers to postpone the final hearing on the project because they knew it was very unlikely to get approved by the government. Now the developers have until this summer to submit a revised project plan, or to back out of the project all together. I expect they will present a compromise, like not turning the whole glacier into a ski slope, or maybe just installing a cable car connecting the two valleys. If the new plan is approved by the government, there will also be the chance for the Austrian Alpine Club and other conservationists to fight the decision in court. 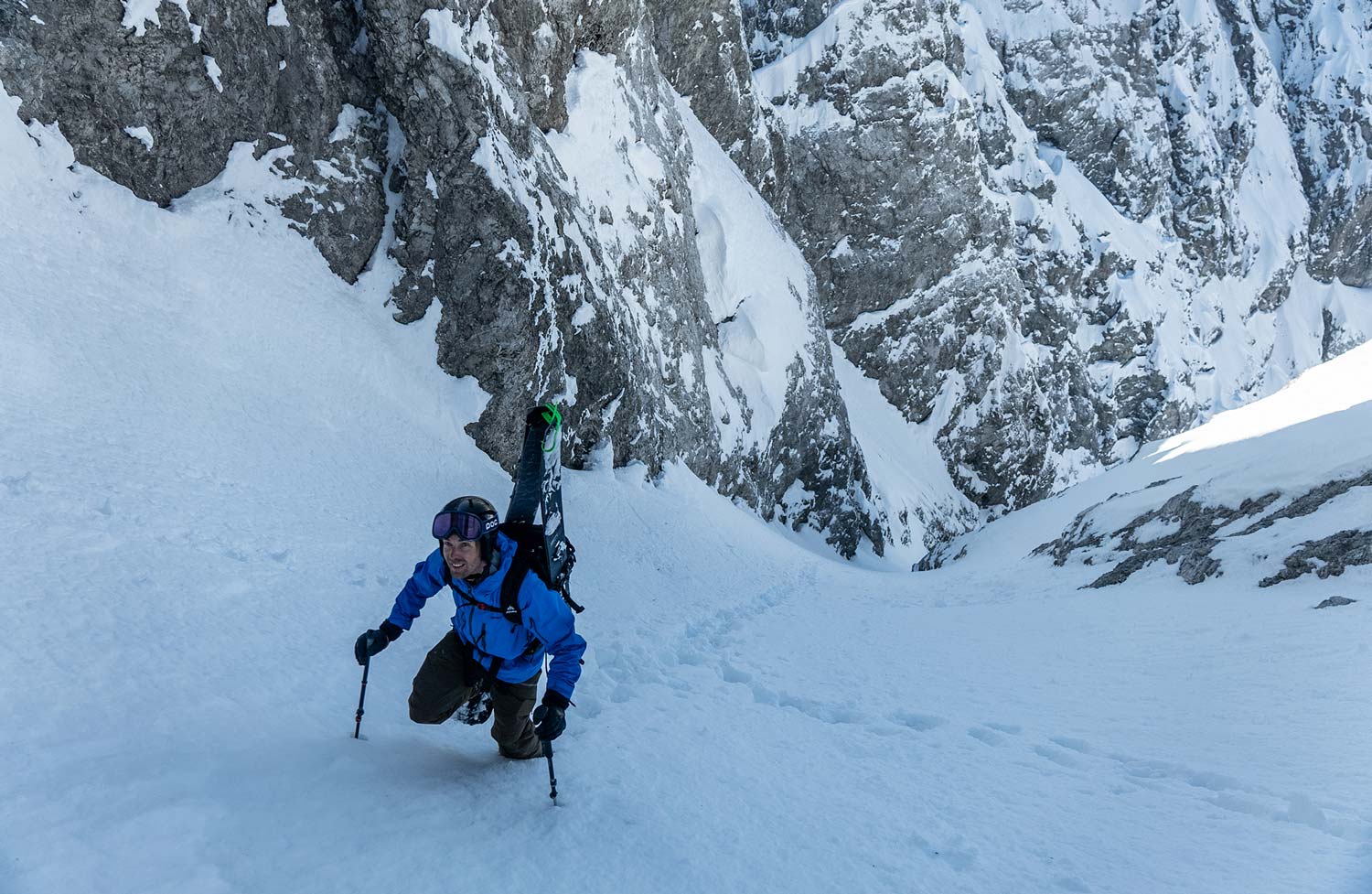 Is there a strong opposition to the Pitztal - Ötztal project?

There is a petition circulating with over 150,000 signatures opposing the connection plan, including some signatures from foreigners people who visit the area every winter. Which brings up a funny point because the resort developers always claim that they need to expand the resort to draw more foreign tourism, but when the developers saw the non-native signatures on the petitions they said that those signatures didn't matter because they weren’t Austrian citizens.

What do the local residents think about the Pitztal - Ötztal project?

Pitztal is a remote valley that is not easy to get to, so at first most of the Pitztal residents supported the project because it would bring them more business. But now we are hearing that a lot of Pitztal locals have withdrawn their support for the project. I’m sure the pandemic played a part in that because connecting the resorts would bring a lot more people to their quiet valley, and a ton more traffic. And that’s the other thing, it's not just about the destruction of the glacier. The roads leading into both the Pitztal and Ötztal Valleys can’t handle more tourist traffic. At the entrance of the Ötztal Valley they counted 20,000 cars a day before the pandemic started in 2020.

What is the political climate like in Austria right now? Is there hope that the government will take a stronger position toward protecting wilderness?

I hope we are at a turning point, where the Austrian government and administrative courts recognize the importance of wild spaces and continue shutting down more projects than they approve. But even one rejection of a development plan doesn’t mean much in Austria. We have no clear laws that protect land from development forever. Project developers will just wait 10 years and try to bring up the project again with a new government. I recently spoke with an Austrian Alpine Club member who said his father had fought to stop the construction of a new ski lift in Stubai 35 years ago, but that same ski lift project was proposed and defeated again just last year. The fight against that development had spanned generations. 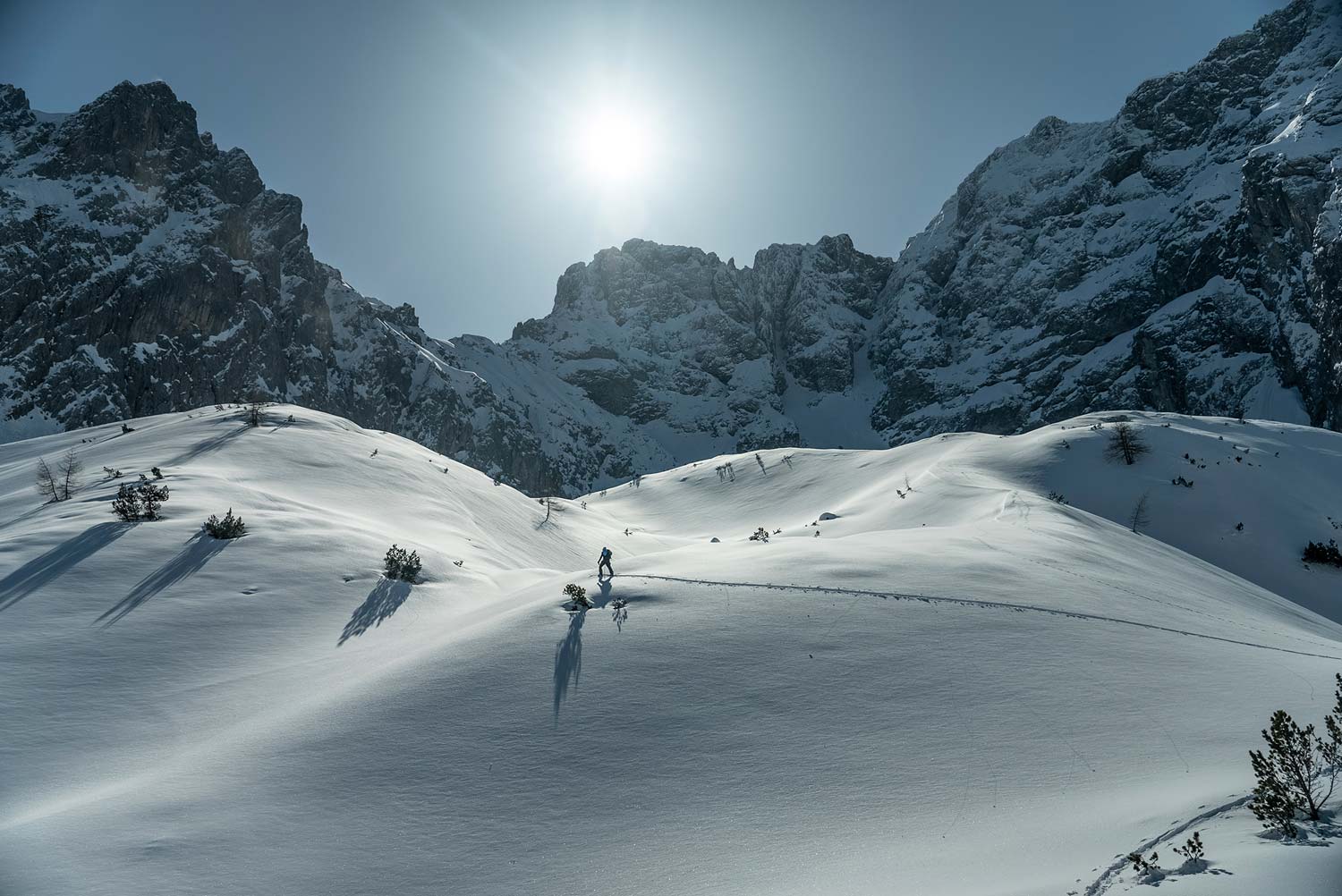 Are there any notable development projects in other countries that need help defeating?

For our film we focused on projects in Austria, but in response to the film we’ve heard from people in several other European countries about troubling plans for development of wilderness areas. So this issue is not just important to Austria, we’re fighting for the preservation of wilderness throughout the world.

What is the best way for people to support the preservation of wilderness in the Alps and beyond?

The best way to get involved is to contact your local alpine club or wilderness preservation organization to learn about what projects they are working on and how you can help support their efforts.

Gear for your next adventure

Modern design, made for movement.